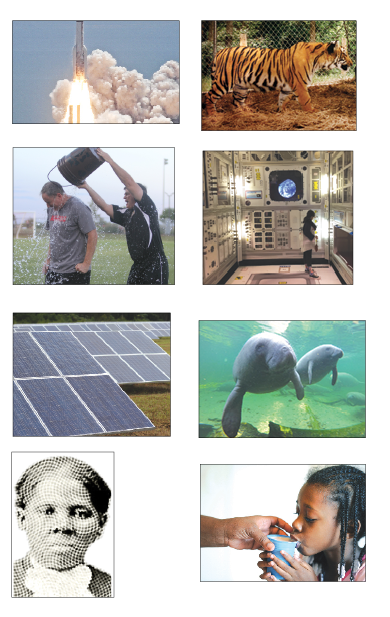 For the first time in a hundred years, the number of wild tigers on earth stopped declining and started growing. According to the World Wildlife Foundation, this is a pivotal step in the recovery of the population. Ginette Hemley, vice president of the WWF, attributes these rising numbers to the efforts put forth since the World Tiger Conference, which met in 2010. 13 countries pledged to double their tiger populations by 2020,  and those with the highest committments — Russia, India, Nepal, and Bhutan — are those who have seen the most improvement. Info from blogs.scientificamerican.com and worldwildlife.org

Astronaut Tim Peake completed his six months aboard the International Space Station, during which he ran a marathon in space, remotely drove a Mars rover, conducted a spacewalk and subjected himself to various biological studies of the effects of long-term space visits on humans. Info from esa.int

Manatees, which have been listed under the Endangered Species Act for the last fifty years, have finally been declared no longer endangered. Even so, they will still be protected under the Marine Mammal Protection Act, which requires a permit for hunting. Info from natureworldnews.com

It was discovered that child mortality has plummeted to less than half of what it was in 1990, from 12.7 million deaths per year to 5.9 million per year. According to the World Health Organization, the period that offers the most challenges is the 28 days after birth; if a child makes it through the first month, they have a much higher chance of living past age 5. Rates can be reduced even more with baby care awareness campaigns in the two population centers with the highest child mortality rates, Sub-Saharan Africa and Southern Asia. Info from who.int

The Juno space probe, which launched in 2011, reached Jupiter, providing the closest and most detailed view of Jupiter yet. It will continue taking measurements until 2018, when it will launch itself into Jupiter’s atmosphere and self-destruct, taking measurements all the while. Info from space.com

The money from the ALS Ice Bucket Challenge funded a study which found a new ALS gene that now ranks as one of the most common genes to contribute to the disease. This gives scientists another potential target for gene therapy preventing the disease. Info from alsa.org

Portugal ran its entire country on renewable energy for four days, setting a new clean energy milestone. From 6:45 a.m. on May 7 to 5:45 a.m. on May 11, all electricity used was produced by solar, wind and water power. The surge in efforts to use renewable energy is part of an effort to meet the European Union’s clean energy targets for 2020. Info from theguardian.com

Treasury secretary Jacob J. Lew made the decision to replace President Andrew Jackson with Harriet Tubman on the $20 bill. The change was originally to be made on the $10 bill, with Tubman replacing treasury secretary Alexander Hamilton, but as a result of Hamilton’s surge of popularity due to the Broadway musical based on his life, Tubman was moved to the $20 bill. Tubman will be both the first woman and the first African American to have her face on paper money. Info from nytimes.com