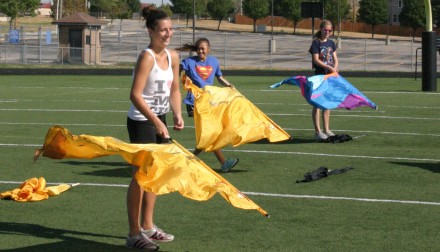 Freshman Madeline O’Donnell practices with her team during band camp. O’Donnell previously attended St. Michael’s; this is her first year of public school. “I can ask upperclassmen anything about school,” O’Donnell said. “Coming from a private school, all my classes were in the same hall, so it’ll definitely be an adjustment.” Photo by Ellie Fehlig.

Every student chooses what they want to wear.
The girls can wear makeup, nail polish and dangly earrings.
Cafeteria staff serve hot lunch in the cafeteria every day.
This will be a completely new experience for the numerous Blue Valley freshmen that previously went to St. Michael the Archangel Catholic Parish.
More freshmen are coming to BV from St. Michael’s this year than ever before.
Freshman Sam Kalmus attended St. Michael’s since kindergarten. BV will be the first public school he’s ever attended.
Kalmus said he chose BV for the welcoming atmosphere.
“[BV is] close to my house, and I shadowed there last year,” he said. “Right away I felt really at home, and the people there catered to my needs.”
Freshman Madeline O’Donnell also attended St. Michael’s from kindergarten through eighth- grade. Although she shadowed at other Catholic high schools, O’Donnell said BV was the right fit for her.
“I just felt the most comfortable at Blue Valley,” she said. “Also, it’s right down the road from where I live. Ever since I was little, I’ve been able to hear the band and see the football games. BV was more inviting than the other schools, and it felt like everyone was very welcoming and excited.”
Former St. Michael’s student junior Kelly Nicholson said she has found only positive things about the switch from private to public school.
“The teachers here seem a lot more friendly and helpful,” she said. “I love all the school spirit and new people. There really isn’t anything that I dislike about BV.”
This is the first year the incoming St. Michael’s students won’t attend church during school or take a religion class.
“It’ll be weird without that regular [religion] class and what it teaches, but I’ll still go to church,” he said. “I’ll get to learn about different religions and understand everyone more, but I won’t be able to grow in my own faith at school as much as I would like to.”
Having worn a uniform to school for the past nine years, O’Donnell said picking out her outfits will be a new experience.
“If you wear [uniforms], you just have to get up and put on your uniform,” she said. “But then you don’t get to wear all your fun, new clothes. I’m a little worried about having trouble picking out what to wear, but I’m sure I’ll get used to it.”
O’Donnell said joining the dance team helped her get to know the school better.
“I’ve definitely met some new people, and all the girls on the team are so nice,” she said. “Since we have practice indoors and outdoors, I’ve gotten used to being in the building. I have a better understanding of the layout of the school now.”
O’Donnell said she’s excited to expand her friendships during high school.
“I’m looking forward to meeting new people,” she said. “Going to St. Michael’s, I’ve always been with the same group of people, so now I’m excited to find my own little place in BV.”