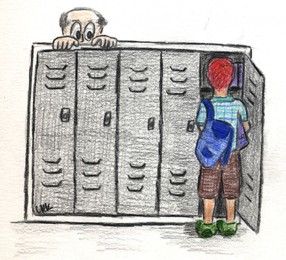 Walking down the hallway, you see the normal sights that make up Blue Valley. Classrooms, lockers and…your dad?
Art teacher Mark Mosier has had two children attend BV, 2010 graduate Emma Mosier and current sophomore Ian Mosier.
Mark said Emma was a student in two of his classes — Digital Imaging and Art History — during her time at BV.
“I was very comfortable with it,” he said. “I worked very hard to treat her just like regular students. I think she appreciated the fact that it wasn’t a special deal — I didn’t want to create an awkward situation for her and her friends. In general, I have a good relationship with my kids, so we’re pretty cool with everything.”
Mark said he requested that during Emma’s senior year, she use the locker next to his room.
“Seniors at the beginning of the year get to choose their lockers, so I just talked to her about having that locker,” he said. “I think I may have even gone to [secretary Heidi] Wood in the office and said, ‘Put Emma in that locker.’ My daughter and I get along fine, and she wasn’t going to argue about it. She was comfortable with it — I liked it, so that’s the way it was. I don’t think she was ostracized for being outside her dad’s room or anything.”
Emma is in an art program at the University of Central Missouri.
“Emma’s always been drawing,” Mark said. “She’s drawn since she’s been able to hold a pencil. We have stacks and stacks and reams [of her artwork]. So, in that regard, she has always had a lot of support.”
Ian said, although he does not plan on having a career in art, he thinks his creativity will help him pursue a career in engineering.
“I do enjoy art as a hobby,” he said. “I think you need a certain degree of creativity in the engineering field.”
Mark said he thinks Ian is comfortable with his dad working at BV.
“It’s not like it’s embarrassing,” Mark said. “I mean — I’m sure a little bit of it is, but that’s just being a teenager. It’s not like I’m crawling behind lockers to watch him. I don’t want him being like, ‘High school was all about my dad following me around.’”
Ian said he agrees Mark’s teaching position is not a disruption to his high school experience.
“It’s OK, really,” Ian said. “We see each other every day. People frequently ask me what it’s like, and I normally just say, ‘It’s not a big deal.’”
Ian said his relationship with his father is much more professional at school.
“We just say hi and then get on with our business,” he said.
Mark said he chose to teach at BV in order to be with his kids.
“I think it’s a rare opportunity that most parents, and certainly most teachers, don’t have,” he said. “We spend our days year after year after year working with other people’s kids, and it’s kind of nice to spend some time with your own in that context.”
Mark said because he and Ian both attend school events, they can discuss them at home.
“We talk about things that happen at school,” he said. “After the [winter recognition] assembly, I was like, ‘Tell Mom about the assembly.’ And, so, he tells her about how we celebrated the football victory, but he left out the part about [my] Minute-to-Win-It victory. So, I said, ‘There was a little more to the story…’ and he goes, ‘Yeah, of course.’ So, he conveniently left that out.”
Mark said he believes BV is a good fit for his children.
“I’m glad my kids got to go to school here,” he said. “It was an easy decision to make.”