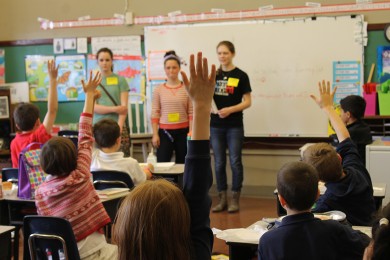 A typical day at school — you talk to your friends during passing period, listen to lectures in class and hear the announcements. But wait — it’s all in French?
Kindergarten through eighth grade students at local total-immersion charter school, Académie Lafayette, experience this every day. Students are taught every subject entirely in French, and the use of English is not allowed.
Blue Valley students enrolled in French 3 and 3.5 classes recently experienced this after completing the “fables” project and taking their stories to Académie Lafayette. They presented to the French-speaking students and teachers and then later observed classes taught all in French.
BV French teacher Carol Bar explained the “fables” project and how much it means to her.
“After we study some African and French fables, students work in groups and create an original fable in the form of a children’s book,” she said. “After we finish the project, we go out into the community and present them to students [at Académie Lafayette]. I love this project — it gets students to take French out into the community and experience an authentic situation where French is used as the main language. It also gives them a chance to practice their writing skills, use their speaking skills and use their listening skills during the question and answer segment following the presentation of their story.”
French 3.5 student sophomore Abigail Krump described the plot line of her fable.
“Our main character is a chipmunk named Thomas,” she said. “He is persuaded to take the most beautiful flower in the forest to his home. He sits and admires it while three different woodland creatures visit him, wondering where the flower is. Each one is negatively affected by the absence of the flower. The once beautiful flower slowly dies. Thomas then walks to the piles of dirt where the flower used to be and reflects on his mistake.”
Krump said she agreed the project was enjoyable but said there were difficulties involved as well.
“It was a lot of work, and there wasn’t a lot of in-class time,” she said. “So, it was a little stressful, but the end product was really cool. Our group
also got a little side-tracked, but it was a lot of fun.”
French 3.5 student sophomore Tyler Elmendorf said the project was beneficial to his learning.
“It helped my vocabulary a lot because you had to put all of your previous and current knowledge together,” he said. “It also helped with public speaking and with my French fluency.”
Krump said her group used a variety of art supplies to depict their fable.
“We used watercolor for the illustrations,” she said. “But first, we started with a pencil sketch I did, and my other group members finished it up with the paint. We then bound it inside a scrapbook photo album.”
Bar said the projects have progressed and become much more elaborate over the years.
“[The fables] have definitely gotten better,” she said. “We’ve gone from very simple illustrations with construction paper pages to a more elaborate scrapbook project with beautiful, creative illustrations. Most importantly, the stories themselves have gotten better and more detailed.”
Elmendorf said he thought the students at Académie Lafayette enjoyed his story.
“They loved our story because it was fun and simple,” he said. “They also loved the main character, a polar bear, and all the other animals in our story because they got to see a large variety of unique animals.”
Bar said the relationship between BV and Académie Lafayette is important to both schools.
“We have a long-standing relationship with Académie Lafayette,” she said. “This is the 10th year we are taking the students over to present their projects. The students there always look forward to it, and the teachers love having us. Our students enjoy the project very much because they get to use their French outside of the classroom — so that’s the best part of it.”
Krump said she thought it would be an interesting experience to attend Académie Lafayette.
“I think I could be extremely successful at Académie Lafayette, but I don’t have a parent that speaks French,” she said. “So, I would only use it at school, and then later I would lose the ability. However, I think it would be awesome to attend the school because I would get to meet other students that are somewhat fluent in French and have a conversation with them.”
Elmendorf said it was nerve-wracking to read his fable to the French-speaking students.
“[The Académie Lafayette students] speak fluent French, and when I messed up a little bit, I think they noticed,” he said.
Bar said she hopes to continue the project in future years.
“With the change of curriculum next year, I hope to continue the project and to incorporate it into our curriculum,” she said. “We will be creating a new curriculum this summer, so it’s just a question of trying to find the space to put it. I love the project very much, and I know the students do, too. I think it’s important to offer opportunities to students where they can use French outside of the classroom and get outside of the textbook a little bit. It’s something I’ve enjoyed doing, and I hope to continue.”