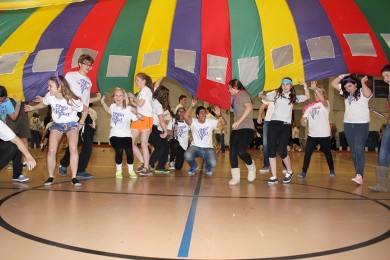 The lights go out, and approximately all 1,000 people in the Johnson County Community College gymnasium go silent. Around the track, paper bags filled with neon glow sticks illuminate the darkness. As all of the teary-eyed participants begin walking the track, they reflect on those they know in their lives who have struggled with cancer.
Relay For Life (RFL) is an organized, overnight community fundraiser for cancer.
This year, the Blue Valley Youth Relay raised nearly $150,000 to help find a cure.
In one participant’s case, she walks directly beside her mother who recently won her eight-month battle with cancer.
Senior Lindsay Miller’s mother was diagnosed with Stage 3 Inflammatory Breast Cancer on her birthday, Feb. 4, 2013.
“My mom was experiencing discomfort and swelling beginning in December of my junior year,” she said. “She first visited the doctor the day after Christmas, which was followed by multiple MRIs, biopsies and CAT scans.”
Miller said watching her mom go through chemotherapy was the most challenging thing to do.
“It was difficult watching my mom go through chemotherapy, lose her hair, have a double mastectomy and receive radiation all within eight months,” she said. “It’s a blessing to see her healthy and cancer-free today, though. This experience has definitely helped me appreciate the little things in life.”
Miller said she wished she could have helped her mother when she was sick.
“I’ll always remember feeling helpless when my mom was sick,” she said. “There was only so much I could do to help her. I couldn’t lessen the pain after her chemotherapy or the double mastectomy, and that was an awful feeling.”
Miller said she has learned a lot from her mom’s struggle with cancer.
“I’ve learned what it’s like to stay strong and remain positive throughout any of life’s hardest obstacles,” she said. “My mom had an amazing attitude during all of the chemotherapies, surgeries and radiation.”
Miller said RFL has a much deeper meaning for her.
“I relay in honor of anyone who has or had cancer but especially for my mom and everything she has overcome this year,” she said.
Miller’s mother attended the Survivor Dinner and the Luminaria Ceremony this year.
“The luminaria ceremony was very sentimental for me this year,” Miller said. “Not only was I lucky enough to be on the Luminaria Committee, but I was also able to walk right next to my mom. The greatest feeling was reflecting on how far my mom has come since last year’s Luminaria Ceremony.”
Miller said everyone who participated in RFL made a difference.
“Everyone should know how much of an impact they’re making,” she said. “Raising nearly $150,000 to help eliminate cancer is something to be proud of.”
Miller gave her advice for anyone battling with cancer in their lives.
“For anyone whose family member is struggling with cancer right now, I would tell them to never lose hope,” she said.