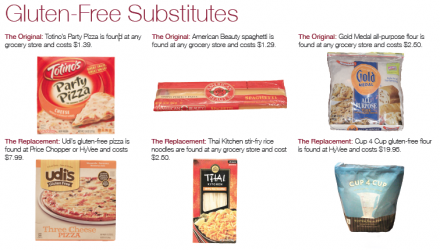 Gluten allergies are becoming increasingly common in the United States. Due to recent research and awareness about the being gluten-free, more and more people are realizing that’s the cause of their constant stomach pain.

Gluten is a protein found in wheat, barley and rye. With gluten allergies, the stomach can’t process the protein, causing pain and stomach aches.

Celiac, a form of gluten allergy, is an autoimmune digestive disease that damages the small intestine and keeps the body from absorbing nutrients from food. Gluten-sensitive people are just intolerant to the protein, so they have similar symptoms to those with celiac but no permanent damage.

Junior Claire Nameth was diagnosed with celiac the summer before her freshman year. She also has a disease that causes other food allergies.

“[The doctors] weren’t sure what food allergies I actually had, so they took me off the top eight allergens,” Nameth said.

She said she was on the elimination diet until halfway through her freshman year.

Her doctor then began gradually reintroducing the allergens and found her body couldn’t process dairy or gluten.

She can, however, still eat dairy when cooked because the protein she’s allergic to cooks out, unlike gluten.

“It’s helped me feel a lot better,” Nameth said. “I used to be really sick and have constant stomach pain, so it’s really helped improve that.”

She said her side effects after eating gluten are severe.

“I get really nauseous,” Nameth said. “I normally vomit and don’t feel [well] for a couple days — and that’s just when I just have cross-contamination like having fries in the same frier as onion rings.”

Nameth said being gluten-free has changed her lifestyle.

“I definitely have to be a lot more careful when I go to a restaurant,” she said. “I just double check and make sure [the food is gluten-free]. It’s made me not trust things as much because I’m always nervous there might be cross-contamination.”

The hardest part of being gluten-free is not being able to eat all the food her friends can, Nameth said.

“Despite the difficulties and inconveniences, going gluten-free is the best decision I’ve ever made,” Nameth said.