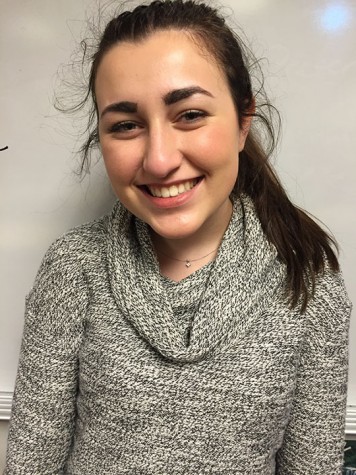 When things get tough you don’t see sophomore Chloe Breslin backing down. In the face of her father’s passing she turned to literature.

Breslin said she is writing a novel that she started in the Spring and writes a few times a week.

“[The book is about] my dad and how his passing has affected me and just everyday life since he’s been gone,” Breslin said.

Her novel is called “I Look Like His,” and she is half way done with writing it.

“It’s very personal, none of it’s fictional,” Breslin said. “It’s my own life within a story.”

She said she is trying to reach audiences that have lost a parent or are going through tough times and need to know they’re not alone.

Breslin said she has been interested in writing since middle school.

“In eighth grade we had a poetry contest, and I won after sharing a poem about my brother,” Breslin said. “After I won a teacher came up to me, named Valerie Golden, and told me to never stop writing.”

Breslin’s motives for writing this particular novel were purely personal, she said.

“[I wrote the novel] probably because I didn’t have a lot of people or want to talk to a lot of people about it — it’s my way of having conversations with my dad,” Breslin said. “[It’s also] my healing process.”

Although writing is her grieving process and a way to talk to her dad, there is much more to literature to her, Breslin said.

“I want it to be an accomplishment I am really proud of and be the stepping stone of more books to come,”Breslin said.

She is very proud of her novel, but she said not everyone is supportive of it.

“A lot of people think it’s silly to spend my free time writing but I have some friends that are really supportive and ask to read it,”Breslin said.

Sophomore Emma Andersen explains that the level Breslin is writing is pretty extraordinary.

“She is already writing at a very high level and many people don’t do that at this age,“ Andersen said.

As far as Breslin’s mother and stepfather go, they do not know about the novel.

“I love my parents just as much as the next person, but I feel like my stepfather would take offence to my grieving,” Breslin said. “I enjoy sharing my works with my parents but this one was a little too personal.”

Breslin’s future in writing is very unclear in terms of making it a career.

“I would want to [write as a career], but it’s hard to make a living off of it,” Breslin said.

There are many reasons as to why Breslin writes and wants to continue writing, she said.

“It interests me that you can connect people with words,” Breslin said. “I hope that someday my words reach others and touch them the way that other author’s work touches me.”