A large part of the Filipino culture is for young girls to participate in a coming of age celebration called a debutante ball. Blue Valley senior Kella Valentin took part in the 2016 ball for FA-GKC,  the Filipino Association of Greater Kansas City.

“A debut can be held any time of any year for individual girls or a group of girls to make things easier on their families when it comes to things like money and preparation time,” Valentin said.

Valentin  said the debutante ball is a very traditional experience often, including things such as a father daughter dance, a dance with fans, and having escorts. However, Valentin said her experience wasn’t as traditional as many balls tend to be.

“[It] was more on the fun liberal side than the traditional one,” Valentin said .

At her ball, which she shared with 11 other girls, the participants also danced including the popular move of “the whip” and “the nae nae.” Many of the girls also changed from the traditional long white gown into shorter dresses to dance with family and friends when the ceremonies ended.

Valentin said the dress choice of the girls “all depends on the girl and her family.”

Friend of Valentin and attendee of the ball senior Sarah Herzberg said she enjoyed the experience.

“It was really cool to be a part of another culture for the night. I really liked being able to wear a nice dress and get all fancy,” Herzberg said .

The people in attendance mostly wore long gowns, and people of all ages attended. Most of the attendees were family and friends of the debuts, Herzberg said.

“It was kind of awkward because I wasn’t aware of all the traditions [like the other attendees were],” Herzberg said. “But I’m glad I got to be a part of something I usually wouldn’t have the opportunity to be.”

Although Valentin’s ball had many traditions and non-traditions, the girls all wore the same white dress, Valentin said.  Another tradition was the fan dance, which is a dance performed by the debuts.

“The fan dance is a big part of the ceremony, but we went more youth based with ours,” Valentin said. “We whipped and nae nae’d which everyone loved because it added comical relief to the ceremony,”

They did not only nae nae and whip at the ball — they also performed other ballroom dances.

“They usually do traditional Filipino dances, but we did the waltz [and] a father daughter number,” Valentin said.

Valentin said these dances did require a lot of practice.

“I started going to practices for the dances at the beginning of August,” Valentin said. “But a lot of the other couples started learning choreography in July,”

Even through all the work and time, Valentin said she liked the experience.

“It was nice to connect with my family’s tradition,” Valentin said. 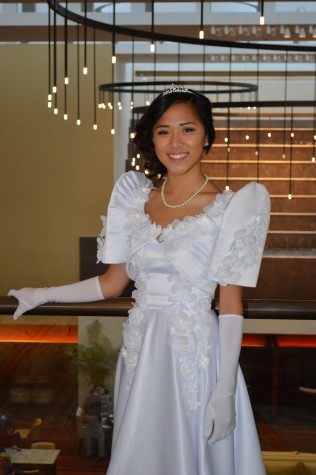