“The path I was on before was going to get me killed. It saved my life, having Tilly.”

In December 2013, “The Tiger Print” covered the then senior, 17-year-old Amelia Sargent’s story of her pregnancy. Two years later, we followed up with Sargent to discuss how her pregnancy changed the course of her life. 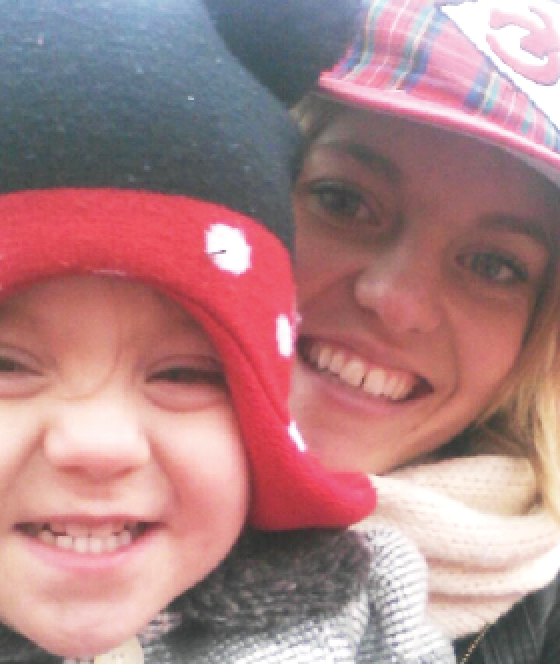 “I was looking for baby names online, and [Tilly] stuck out,” Amelia said. “I looked up the meaning, and it means mighty in war, which fit her perfectly after everything that has happened.”

Since graduating high school, Amelia juggles the hectic schedule of taking care of Tilly, her job at the printing company Ricoh and classes four days a week at Johnson County Community College.

Amelia said although this can be lots to handle, her friends and family are there to help ease her stress by taking care of Tilly while she works.

“My family is 100 percent supportive,” Amelia said. “They’re super helpful. They watch [Tilly] for free — they love watching her.”

Tilly’s father, Cody Lyndell, is still present in Amelia and Tilly’s lives, but Amelia said they are not romantically involved.

“[Cody] sees Tilly Tuesdays and Thursdays while I work,” Amelia said. “He watches her, and then he gets her on the weekends. We’re basically a business relationship. We’re not really friends, but we aren’t enemies.”

Amelia said becoming pregnant was a major turning point in her life; until then, she was living recklessly and without much purpose.

“I was a terrible high school student,” she said. “I was into a lot of bad things — I was drinking, smoking and hanging out with the wrong crowd. I did not care about school. When I got pregnant, it was a huge wake up call — it was God telling me, ‘Hey, you’ve got to come back. You’ve been gone way too long, and it’s gotten you into trouble.”’

After she gave birth to Tilly, Amelia said the quality of her her life began improving.

“[My life] changed so much,” Amelia said. “I’m sober, and I actually get along with my family now — that’s a big thing. I care about school — I’m getting all A’s in college.”

Amelia said she wanted so strongly to rely on God, but she was caught at a crossroad. She still faced hardships from her old lifestyle and struggled with drug relapses.

“I was in a relationship with somebody who wasn’t the dad,” Amelia said. “He was a drug addict. He smoked all the time, and he would go to raves and do acid. He was never around Tilly at all. I would smoke with him after she was in bed or after a long day to get to sleep. It’s not making it OK, but I was never like that around Tilly.”

Amelia said she lived with this man and wanted it to work for her child’s benefit, but she ultimately knew she needed to escape from the situation.

Amelia said she also wrestled with the idea of sex before marriage and how to approach it now that she has a child.

“I thought I already ruined the whole virginity thing,” Amelia said. “[I thought] there’s no point in going back now. After that bad breakup and moving out of his house, I realized that [having sex before marriage] was something I shouldn’t be doing. At the time, I was really trying to grow close to God, but that kept getting in the way. I have now decided to wait until marriage.”

HER TURN TO FAITH

Amelia said she realized she couldn’t continue living two lives at once, so she rededicated her life fully to God and was baptized at Grace Church as a public representation of her faith.

“I was raised in church,” she said. “The whole reason I went ‘bad’ was because I was just rebelling from all of that. After coming back to God, I had started school, and I hadn’t thought about [baptism] until I went to Grace [Church] and saw someone get baptized. It was an accountability type thing [and] an opportunity to share my story — how God has worked in my life.”

Believing God has called her to become a youth pastor, Amelia is at peace with her past since she will use it as a tool to guide other teenagers away from the things she was involved in.

“I’ve been there,” she said. “I can tell students from my first-hand experience, ‘Hey, don’t do this because I did it, and this is what happens.”’

Amelia said she battled feelings of unworthiness during this transition.

“There’s no such thing as too far gone,” Amelia said. “God loves you, and He will always love you. Jesus will always be there — He will always want you back. There is nothing you can possibly do to make Him not love you.”

Amelia said her pregnancy and the constant battles along with it have greatly changed the course of her life, and she has only God to thank for that. She said she doesn’t regret her past. Without it, she would never have come full circle to the person she is now, and she wouldn’t have Tilly.

“It has opened so many doors,” Amelia said. “It made me grow up a lot. The path I was on before was going to get me killed. It saved my life, having Tilly. God works in mysterious ways for sure. I’ve learned a lot, but I don’t regret anything because where I was back then brought me to where I am today, and I’m so grateful for that. I love her so much. Tilly has blessed me in so many ways.”