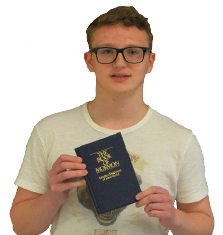 Through math, music, writing or a good book, students strive for knowledge and wisdom, with many wishing to impart said knowledge to any and all who may listen.

Some more religiously inclined students, though, plan to dedicate their entire lives to this pursuit, enlisting as missionaries for their local church and spreading their values across the globe.

The Mormon Church is known for producing these door-knocking, bible-wielding messengers of God. Senior Spencer Callister is making final preparations for his own mission trip later this year. Callister plans to go to Brigham Young University in Salt Lake City, Utah, after high school but not before spending two years on a mission.

“I’ve started my mission papers, and I put my availability for August,” he said. “I’ll have the summer to prepare.”

He said every mission is different, and he won’t know where he’ll go until months after submitting the mission papers.

“We submit papers about ourselves and then send them to Salt Lake City where the church’s headquarters is located,” he said. “They pick a place for us to go depending what we say on our papers. We’ll go there for two years, but sometimes they cut it short. It usually involves us going around [promoting the] church, knocking on doors and meeting with people — teaching them about our values.”

Callister said he has been a member of the Mormon Church his entire life and lives by their beliefs and traditions.

“It has really blessed my life, and I’m really thankful that I’ve grown up in a church with strong values,” he said. “It has helped me make the right choices, not get into trouble and build myself into a better person. We strongly believe in agency. We believe we have the right to make choices, but we do not have the right to choose the consequences. The reason why we are here is basically to learn and become better [people].”

Although it represents a higher cause, Callister said he believes his choice to go was because it was something he was called to do.

“It was just something I felt would be one of the most important pieces in my life,” Callister said. “Without it, I don’t know what I’d do or where I’d go.”

Leaving for two years for a mission of seemingly random location can be a very daunting task, but he said he has Blue Valley to partially thank for his ultimate motivation.

“I am inspired by the returning missionaries who come home, especially the ones I actually knew since I was young,” he said. “The seniors who graduated my freshman year are coming home now from their missions. Its really motivating just seeing how much they’ve improved — it’s crazy.”

Callister said the mission will be very goal-driven, but he hopes to learn how to put effort into everything he does.

“[The most difficult thing] would probably be the amount of focus it requires — but it is going to be worth it,” Callister said. “We go to the [Missionary Training Center] in Provo, Utah. There’s no hazing or anything, but they train you how to work like a missionary. If you’re going foreign, they’ll give you a month to learn the language. My dad went to Belgium, and he had to learn Dutch within a matter of weeks.”

For Callister, mission trips are a family tradition.

“I’ll have very little contact with them,” he said. “I’ll get to phone my mom two times a year — Mother’s Day and Christmas — but I think at the same time, it will also strengthen my relationship with my family. I’ve seen families with missionaries out in the world who have really been blessed in many ways. By doing this, I’ll be able to bless mine. My brother is out on a mission, and we have been blessed very much — we have learned how much we really need each other and how much we love each other. We really wouldn’t be able to do this without each other.”