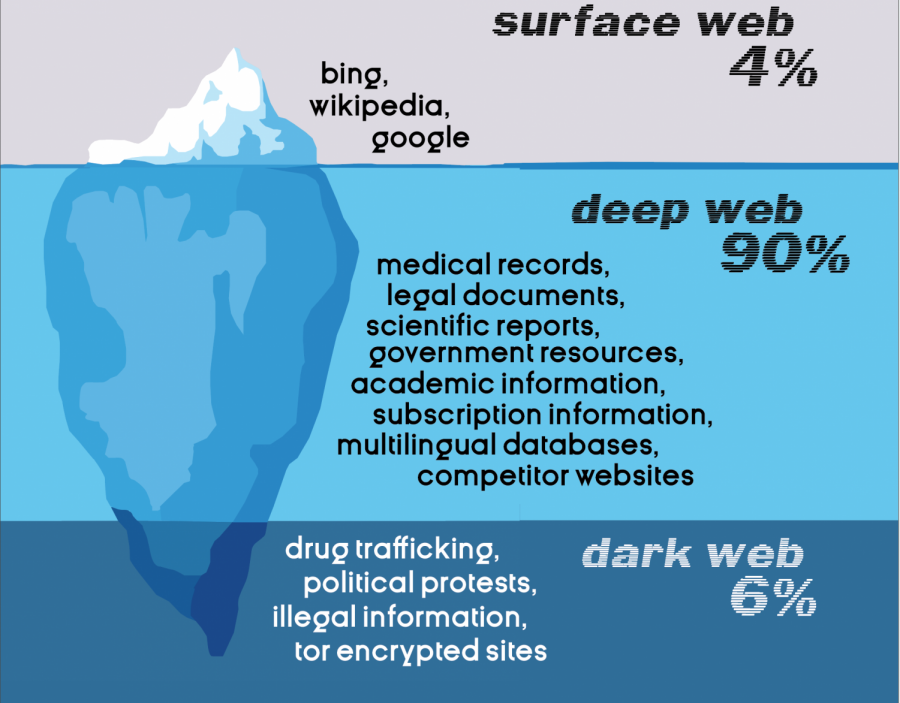 You probably spend most of your time on the internet shopping, browsing social media, and researching for homework assignments. However, the internet that you’ve been using for those services masks an evil darkness that no one knows about. This concept is known as the Dark Web, and if used recklessly, could lead you down a path of criminal activity and troubling encounters. Read on to learn about this cryptic type of the World Wide Web.
Dangers of Accessing the Dark Web
If you think the internet is a wide variety of endless information, you are misinformed. According to CSOonline, only about 5 percent of the internet is public. The other 95 percent of it isn’t accessible through traditional web browsers. This part of the internet is known as the deep web. The deep web has another, deeper component to it called the dark web.

The dark web is particularly complicated to access due to its hosting of illegal activity and the numerous browsers that require granted admittance.

The deep web enables access to hidden documents, while the dark web is filled with five levels of “hidden rooms.”

Despite their slight differences, both the deep and dark web are hubs for criminal activity.
Student Experiences
There are multiple reasons people choose to dive into the dark web.

“I read an article somewhere that said the regular internet that we use is only 5 percent of what we can access,” sophomore Arshya Zakeri said. “I got fascinated and wanted to see what they’re trying to hide from us.”

Zakeri said people have to be careful when accessing the dark web.

“You have to download a special browser called Tor or Tails, and once you do that you need to have two flash drives and CDs so your entire computer is erased,” Zakeri said. “You need to hide your webcam, and you have to make sure your microphone is off.”

Zakeri said she saw a lot of things she wish she hadn’t on the dark web.

“I always heard about WikiLeaks [on the news], and I saw a lot of those — pages about celebrities with their addresses, phone numbers and social security leaked,” Zakeri said. “There were documents the government hasn’t really talked about that the FBI has posted, like 9/11 and JFK. There were a lot of child pornography websites, and there was a lot of illegal gun purchasing and drug websites.”

Zakeri said her expectations were exceeded — she thought the dark web was just a 2.0 version of Reddit. After exploring, she found what was hidden.

“I was really surprised by the WikiLeaks — I never knew they would be posting someone’s social security, bank numbers, check numbers and even selling stolen credit cards,” Zakeri said. “I found it really interesting. It’s like the movie ‘Unfriended’ — the videos of people kidnapping girls and then paying for them. People would say, ‘Give me 5.0 bitcoins, and I’ll bring this girl to you and you can do whatever you want to her.’”

Zakeri said there is also a red room, but no one has really gone on it to prove it.

“[The abusers] basically auction off people; it’s all live,” Zakeri said. “Someone can pay [the abuser] $1,000 to rip out all the victims’ fingernails, and people [are auctioned] off.”

Zakeri said she believes people who partake in these activities do so for the money or because they are sick in the head.

“A lot of the videos are people putting cameras in little girls’ or boys’ rooms,” Zakeri said. “They show themselves sneaking in through the window and then they give the cameras a little thumbs up like, ‘I did it.’”

After visiting the dark web, Zakeri said disturbing things began to happen to her.

“I started getting calls from the [number] 666 — I got maybe 30 in one day, and when I answered I didn’t really hear anything — not even breathing,” Zakeri said. “Everywhere I went, it says you have to change your IP every five minutes. [The computer] can’t be on full screen, but I never listened to any of that.”

Zakeri said she has visited the dark web frequently for the last three years and said she’s interested in finding out what actually [happens] at rallies and videos the public isn’t shown.

“All of my friends know I’m a big conspiracist — I don’t really trust everything the government says,” Zakeri said. “I just like to know the facts.”

Blue Valley student Jack*, whose name has been changed in order to maintain anonymity, shared his experience with the dark web.

Jack said his fascination began because of the movie “Unfriended,” and he had to research precautions to take before continuing onto the dark web.

“You have to get a VPN and private search browsers,” Jack said. “You have to tape the camera so no one could hack your computer. You have to go through a bunch of different browsers and you have to search through different things and find hidden keys to click on to get past certain levels. It depends on how far you want to go, and it’s almost [like a game].”

Jack said when he accessed the dark web, he went through different layers.

“First, there were drug sales — which was just lots of weed,” Jack said. “Then we found links to click on things where you could watch people get murdered — we didn’t do that because we aren’t psychopaths. If you go far enough, you can find red rooms which you have to be a code expert to get onto. The FBI can’t track them. They’re torture rooms, and it’s really messed up.”

Jack said because the dark web is a terrifying place after he explored it, he started receiving disturbing calls.

“I thought it was one of my friends trying to prank me because they knew I was freaked out and said, ‘We’re going to come to your house and rape you,’” he said. “Then I got a bunch of random calls from people in like Illinois, Florida and New York, which is weird because my phone was away and I wasn’t even using it when we were on [the dark web].”

Jack said he would go on the dark web again but would turn off his phone and be more careful. He said there are sick reasons behind the hackers’ ambitions.

“There could be different things, like they’re trying to find you, find victims or drag you into their sales and get you involved into it — you’re a witness,” Jack said. “If you snitch on them, they could get in trouble so that could be another reason.”

Jack said there were just crazy people who enjoyed looking at the things on the web along with a strong curiosity have a motivation behind entering the unpublished part of the internet.

“It’s just the mystery of what it really looks like for those terrible things to happen because everyone hears about them, but not a lot of people see them and people just want to experience that,” Jack said. “It was crazy to see how easy it was to get on [the dark web]. Once you get on there you can find anything really quickly, except for the crazy and really messed-up stuff. It was kind of weird to see how easily you could buy drugs off the internet and not get caught.”
SRO Perspective
If students are caught on the dark web at school, there will be consequences. Although there’s no law against browsing the dark web outside of school, most of the websites on the dark web could be perceived as illegal, Student Resource Officer Trevor Burgess said.

Burgess said there is a part of law enforcement assigned to the dark web.

“Once you get on the dark web, there’s so many loopholes that you have to jump through to get to somebody’s page,” Burgess said. “There’s so many passwords and it’s just a server somewhere.”

Student Resource Officer Nate Schmidt said if you’re exploring the dark web by yourself, you will probably hit a lot of dead ends.

“It’s a community of users where they have to know you and trust you to go further,” Schmidt said. “Once you start knowing people that are opening up the community, then you’ll be able to access more.”

Burgess said although people know about the dark web, many are hesitant to investigate it.

“They know people are out there doing mischievous things, but it’s hard to get to [those things],” Burgess said. “It’s hard to access and that’s why it [isn’t] popular.”

Burgess said besides illegal activity, gamers can use the dark web for hacks and cheats.

“It’s gotten to a point where the normal internet has actually cleaned up a little bit,” Burgess said. “Now there’s this underneath portion of it.”

“Let’s say you leave your social security number and driver’s license in the car, and it’s broken into,” Burgess said. “Somebody having that can do a lot of damage.”

Schmidt said the usernames and passwords for everyday apps can be bought and used for as long as the subscriber keeps their username and password the same.

“You can buy someone’s Netflix username and password have it as long as that person has that username or password,” Schmidt said. “If they change it then you have to buy another one.”

Burgess said he experienced first hand the effects of the dark web when his Netflix account was hacked.

“Our Netflix at home has been compromised,” Burgess said. “One day, there were these random shows that showed up in our playlist. We realized neither of us had watched them, so we changed our username and password.”

Burgess said once someone stumbles onto the dark web, his or her computer is getting searched and all of your personal information is exposed.

“It’s so weird,” Schmidt said. “The craziest stuff you can think of, they can do.”