Who is Catherine Whitten on “Jeopardy!”? 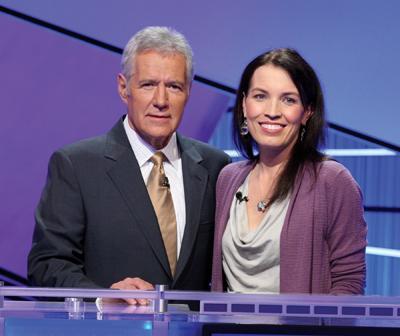 Catherine Whitten, a social studies teacher at BVHS, was also a contestant on the game show “Jeopardy!” in 2012.

For some, the application process for the game show can be long and difficult, but Whitten was lucky.

“There’s an online test that’s offered every year,” Whitten said. “They then will invite people to an in-person interview. It was the first time I’d actually tried out for jeopardy. I got my in-person interview, then they contacted me about being on the teacher’s tournament.”

Whitten prepared for the show by re-watching previous episodes and testing her random knowledge.

“I would watch several [Jeopardy!] shows in a row, keeping track of how my scoring was going,” Whitten said. I was also the academic team coach back in Texas.”

The “Jeopardy!” contestants spent time together off-screen, as well as when they were competing.

“For tournaments, you spend a lot more time with the contestants,” Whitten said. We were all teachers, so we had that in common. After filming was over on the second day, we all went out together and hung out.”

One of Whitten’s favorite memories of the game show was meeting her current husband there.

“He was one of the other teachers in the contestant pool,” Whitten said. “I ended up coming up to Kansas City to visit him in March of that year.”

The two decided to get married on January 24, the day they taped their episode.

As for the famous host of the show, Alex Trebek, Whitten said she didn’t get to talk to him much. However, he shows his authentic self to the audience.

“He is as snarky in real life as he appears to be on the show,” Whitten said. “I can definitely confirm that.”