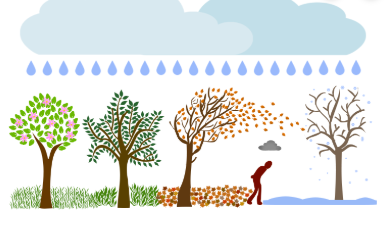 Everyone is familiar with depression and the general associations that correlate with them, but what most don’t know is that depression can go much deeper than what others may perceive. Junior Leah Schmalz gave an insight into seasonal depression and all that goes along with it.  Schmalz described seasonal depression as a “mental disorder where you get sad just because there isn’t a lot of sunlight”.

Symptoms of seasonal depression are different for everyone. Many people suffering from this disorder have different experiences based on their background with general depression. The same fact went for Schmalz when she described her own experiences.

She elaborated on this when mentioning how her “normal depression [got] worse” whereas others, who don’t have diagnosed depression, “just get depression during times when it gets darker or colder.”

Schmalz has been juggling seasonal depression since she was in the seventh grade. She believes her disorder was formally introduced through her diagnosis with severe anxiety at age seven.

As time progressed, Schmalz realized that her symptoms were rapidly getting worse. Starting middle school is when Schmalz, as well as her doctors, began to notice “different symptoms that went along with [her] depression.”

These symptoms included a variety of different topics, but the main one that caught the majority of attention was the change of mood and lifestyle around the time of seasonal shifts.

When diagnosing someone with seasonal depression, it is important to get a professional opinion to help analyze and digest all the information that comes along with it. Social worker, Moe Edmonds gave an insight on seasonal depression. It can take a significant physical toll on students when juggling finals the upcoming holiday season.

The most common physical symptoms of stress are an upset stomach, lightheadedness, and especially the system of a full-blown anxiety attack.

Trying to cope with the changes involved with seasonal shifts can be difficult, but discovering self-oriented coping tactics can make a dramatic effect. As the stresses involved with each seasonal shift continue to grow, making sure to make time for self-reflection and care can assist in relaxing both the mind and body. “Even though I am not able to diagnose a student, I always try and give them ways to take a break and focus on themselves” explained Edmonds. Taking time out of each and every day to have a personal check-in is one of the most important ways to self-assess and re-evaluate.

Seasonal depression cannot be professionally diagnosed by anyone other than a doctor, so recognizing the symptoms and being able to ask for help are vital steps in managing the disorder. Although it is something that cannot go away, finding ways to overcome the downfalls has been shown to be key in maintaining a healthy lifestyle no matter the situation.