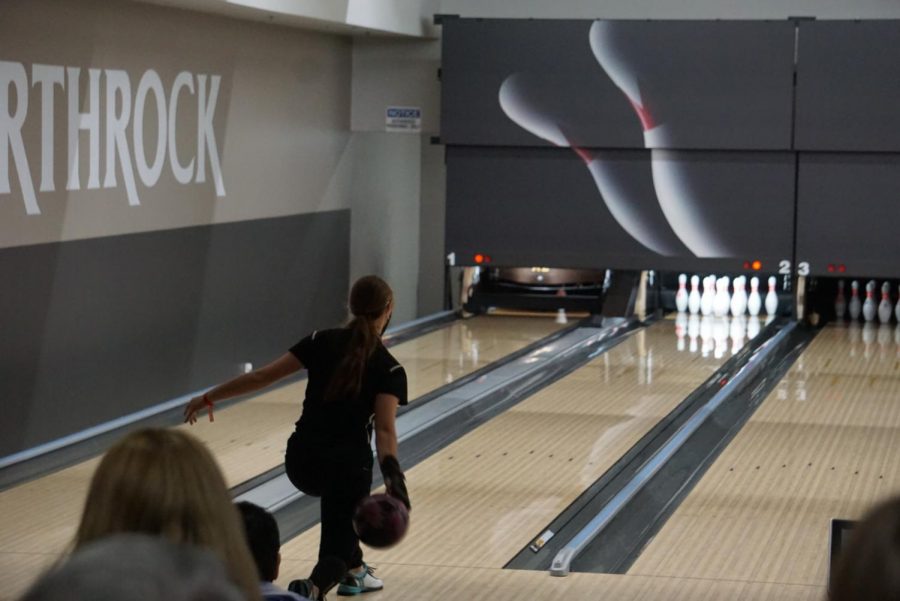 In December of 2020, sophomore Liz Blackman received a text from her friend to join Blue Valley’s girls bowling team. Four months later, she is the first ever in BV history to attend State for bowling.

After deciding she was going to try out, Blackman told her dad, who had taken bowling as a college elective.

Contrary to Blackman’s original belief, bowling is much more technical than just throwing a ball at pins. A month before bowling try-outs, Blackman and her father bowled almost everyday in order to prepare.

“I got a ball, I got some shoes — and I started learning how to bowl,” Blackman said. “It was a painful process for the first couple months — like gutterball after gutterball.”

By the time of try-outs, Blackman was bowling with and 80 point average — 40 points less than what she needed to get Varsity and because of COVID, the girls were either on Varsity or not bowling.

“I get to try-outs and I am the only girl with a ball and shoes,” Blackman said. “I thought, ‘Obviously, I’m taking this a bit too seriously.’”

Fortunately, Blackman’s bowling with her dad helped her make Varsity. When she wasn’t practicing with the team, she was bowling on her own.

“I was bowling everyday, at least two hours, maybe eight or nine games a day and I just continued to get better at it,” Blackman said. “My highest game at regionals was a 194.”

After ninth in Regionals, Blackman was shocked to hear she qualified for State, however this didn’t surprise bowling coach Mark Mosier.

“She’s past the basics,” Mosier said. “She’ll have a day or two where she has to tweak this or that, but she’s able to internalize that instruction differently than somebody who hadn’t really bowled before.”

Even though he knew Blackman had the potential of going to State, he still was celebratory when she qualified.

“Mosier was really excited when I made it to State,” Blackman said. “It was the most excited I’ve ever seen him, which was still less excited than any person I’ve ever seen.”

The night before State, Blackman and her mom drove to Wichita, Kansas and spent at a hotel. The next day, Blackman competed.

This new set of anxiety waved over Blackman and she said contributed to her performance at State.

“It was some of the worst bowling I’ve done since I’ve joined the team,” Blackman said. “I chalked it up to the stress. I felt frozen. It was like I kind of forgot how to bowl for a minute.”

Though she wished she had done better at State, Blackman said the experience wasn’t a total loss for her.

“Now that my season is done, I’m in private lessons and doing leagues and tournaments outside of school,” Blackman said. “There’s a sharp difference now. I just recently bowled my first 600 game, which is three games over 200.”

With her improvement thanks to private lessons, Blackman has been able to focuses more intensely on bowling — and with that, her love for the game has grown even stronger.

“I started watching professional bowling and may or may not have spent an entire weekend watching PGA tournaments from 2010 to 2021,” Blackman said. “My family was so done because I commandeered every TV and as I moved from one room to another.”

Bowling helped Blackman feel confident in herself, as she finally felt she found her talent.

“I’ve been looking for something I’ve been good at for years. It’s like a joke in my friend group because I try a lot of things, but I’m really bad at it,” Blackman said. “Then I started bowling and everyone’s like, ‘Wow she could do that.’”

Not only is Blackman attending tournaments in different states, she, along with 30 other girls, has been invited to the Summer 2022 London International Bowling Championship.

“It’ll be thefirst time I’ve been overseas that’s not a family holiday for bowling and I’m really excited,” Blackman said. “It’ll allow other things to open up.”

With a new sense of direction, both Blackman and Mosier are excited for her next year season with the Blue Valley bowling team.

“I have no doubt she’ll be [at State] next year again,” Mosier said. “I think because she’s bold when she bowls, [and] she has a lot of natural ability and talent.”

As for now, Blackman hopes to improve her bowling skills and to keep playing the game she loves.

“Bowling is great because you can play now or you can play when you’re 90 years old,” Blackman said. “[Because of bowling] my mental health is doing a lot better. My grades are are actually doing a lot better because I have a reason to do well in school. I absolutely love bowling. There’s few other things I’d rather be doing.”