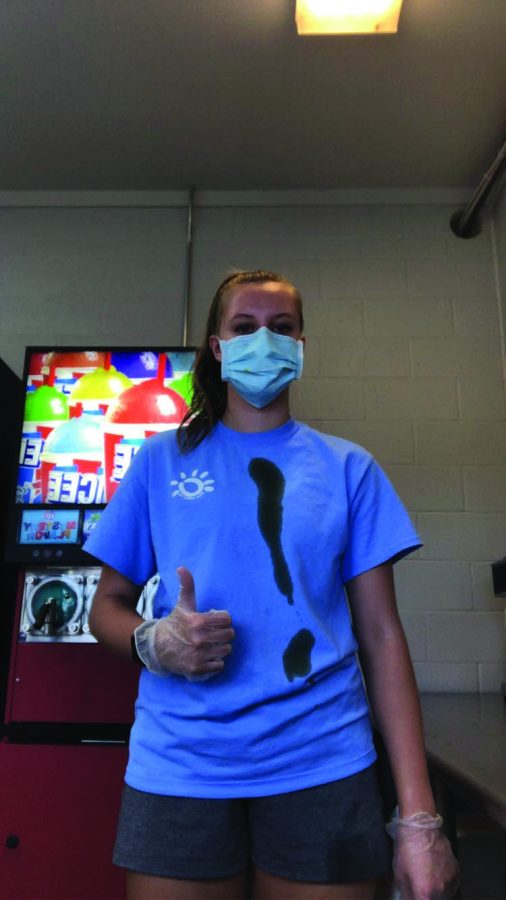 Throughout high school, summer break becomes more than just a chance to relax and spend time with friends; summer is a chance to get a job and earn money before returning to school in the fall.

For senior Sarah Gravitt, the Blue Valley Recreational Sports Complex was an appealing summer job choice for more reasons than one.

“I started working at the beginning of the summer of 2020 because I wanted to make some extra money aside from babysitting,” Gravitt said. “[I also wanted] to have a legitimate job under my belt before going to college.”

During a typical shift, Gravitt would work at one of the concession stands or collect spectator fees at the gates. She scheduled herself to work three to four times a week, and shifts would usually last six hours, which could be exhausting during weekend games.

“Because of a constant long line due to large tournaments, I never sit down — so by the end of the night, my back aches,” Gravitt said. “It is so worth the pain, but man oh man do I hurt.”

Though her work could be tiring and stressful, Gravitt found joy working with the other teens who turned to the sports complex for their summer job.

“Everyone is so chill and just having fun, making jokes, enjoying themselves and having a good time,” she said. “I am pretty close with my coworkers, as we are all there just trying to have some summer fun — and we usually do.”

Apart from having fun with her coworkers, interacting

“A lot of times young players won’t come with their parents, so they feel all proud of themselves to hand me some cash in exchange for a snack or drink,” she said. “I also love watching their eyes light up when they get a sweet treat or something that really excites them.”

When she looks back on her time at the BV Rec fields, Gravitt not only remembers the moments she’s shared with her coworkers or the interactions with players but also the funny memories that have helped teach her to be flexible while on the clock.

“One time, I was in a rush to make popcorn, so I reached up for the oil cup to refill it — I was bringing it down to the counter and because I had used it earlier, the excess oil spilled all over my shirt and shorts,” Gravitt said. “It was quite funny at the time but also stressful because
[I had to] call my manager to bring me a new shirt, and customers judged the oil on my shirt.”

Because of the overall positive experience she has had at the BV Rec fields, Gravitt plans on returning to her
job for the third time in summer 2022. To her, working a summer job has taught many valuable lessons that she can use throughout her daily life.

“Working the concessions is a whole lot of work people don’t always realize,” Gravitt said. “Now having experienced it, I do my best to treat workers and employees with as much respect as I can because I know how much hard work goes into it.”