Mosier on the Move 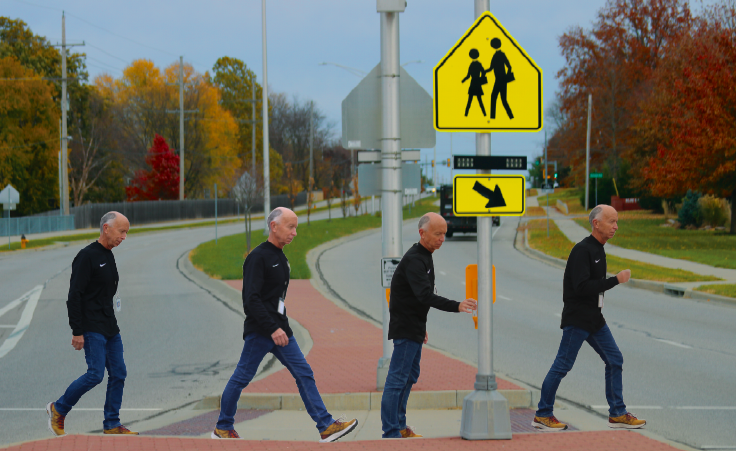 Since January of 1987, art teacher Mark Mosier has walked to Blue Valley almost every day, even in bad weather. With the rise of climate issues, walking to school has allowed Mosier to reduce his environmental impact and has given him time to himself before spending all day around others.

“[Walking is] a good time to think — I can get fresh air,” Mosier said. “Even if it’s snowing, that’s a challenge. I’ve walked over ice, snow and sleet. My mom used to tell me you’re not going to melt if you get wet.”

With more than 30 years since he and his wife moved here, many improvements have been made for safety.

“For a long time, Overland Park took a rather disinterested view of safety because they said, ‘Well, you know, only half of it’s our street. The other half — [we’ll let Stilwell] deal with it.’ Prior to [the roundabouts] there was no signal or anything. It was just a designated crosswalk,” he said. “Even though there were school signs, as we know, adults and kids in a hurry don’t pay attention to signs. You could have 10 signs that said you’re entering a school zone, and people don’t care.”

Even with the installation of newer crosswalks, Mosier has still felt unsafe due to students and parents not paying attention despite the many indicators to stop.

“People just blow through [the roundabouts],” Mosier said. “I try to be respectful. I realized I don’t push the button expecting them to stop immediately. But many times I’ve pushed the button, the light’s blinking or they can see me, and they just don’t care. They’re inconsiderate. People should respect others, especially when you’re walking. I mean, you’ve got a car. You can wait five seconds.”

It’s only about a seven-minute trek from the school to Mosier’s home. With the traffic issues in the morning, it’s a much quicker and beneficial way to commute to and from Blue Valley.

“It’s probably not much more than a quarter-mile from here to my house, and it’s ridiculous to drive a car,” he said. “We know climate issues are going on anyway, so if I can, it’s not that far to walk. It’s a good way to get a little bit of exercise. After school some days I can walk faster than it takes me to be in traffic [and] wait in the parking lot to find a place to park. It just doesn’t make sense.”

While Mosier feels there have been improvements made to his commute, he hopes by setting an example he can impact future generations.

“It’s gotten a lot better but it’s taken 30 to 34 years that I’ve been walking across the street — it’s taken that long to really get to the point where it should be,” Mosier said. “A fair number of students cross there, and I think if people can say ‘Hello, who’s that guy? Oh, there’s a crosswalk and people use it.’ Then when students use it, maybe it’s a little bit safer for them.”