To My Bright Future… 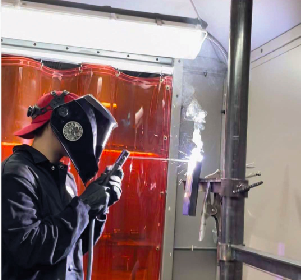 As his time at Blue Valley began coming to a close, senior Nick Nagel stumbled upon a nontraditional career path while scrolling through his phone.

“I saw [welding] on social media — YouTube and things like that,” Nagel said. “I started watching videos, and I realized how much you can make doing it if you give it enough effort.”

Luckily for Nagel, the district partners with Johnson County Community College to make trade classes and other fields of study more accessible to high school students.

“I started last August,” he said. “Blue Valley pays for the career readiness program, so I’m pretty much sponsored by Blue Valley to go to JCCC and take their welding courses.”

Nagel spends the better half of his school day at JCCC, where he encounters two different classroom environments.

“For the first hour, you have a lecture, which is teaching about welding,” he said. “Then from 9 to 12 is laboratory — you’re in the lab actually welding the machines and learning.”

Though the lectures may be necessary, Nagel favors the hands-on experience he gets later in the mornings.

“I definitely [prefer] being in the laboratory for sure,” he said. “It’s full of a bunch of metal and a bunch of cool tools. It’s just sitting there all day with some earbuds in and putting some metal together.”

Not only does the program provide exposure to potential career paths, it also allows students to explore areas of interest without monetary pressure.

“You get your first year for your associate’s [degree] paid for by the school, not out of your pocket,” he said. “You can do it your senior year, get elective credits for high school and for college. If you don’t like it, you don’t really lose anything. It’s a win-win.”