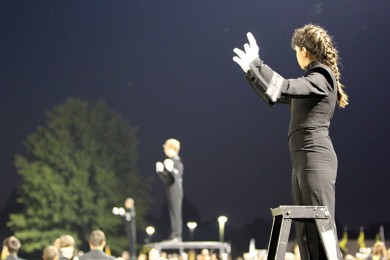 Trumpets. Drums. Dancers. Recycling bins.
For the 2013 marching band season, the Blue Valley band will perform their show “Earth Song.”
Named for a featured song by pop star Michael Jackson, “Earth Song” is designed to spread awareness for protecting the earth.
“It’s about conserving resources and saving the earth that we’re destroying,” band director Avian Bear said. “Our goal for awareness is making people aware of their personal footprint and putting more thought in what they do.”
Bear said a few staff members came up with this idea, including the band’s visual director Paul Bessetti.
“For my part, I did an Earth show a couple years ago and thought it was a rich subject with many avenues to explore,” Bessetti said.
The show conveys an Earth covered in garbage, and, that with music and marching, is cleaned. Bessetti said getting the story across to an audience is difficult considering their only medium is music. However, this increases his satisfaction in the show.
“My enjoyment of this show comes from seeing and hearing the storyline of the production from start to finish,” he said.
The largest component of the band show are the students who participate, Bear said. She said the students love the music, and Bessetti agrees.
“We’re playing cool, relatable music, including Radiohead and Michael Jackson,” Bessetti said.
Bessetti also said this show is attempting incorporating new elements into marching band.
“We’re digging deeper with our visual program, which is allowing our students to attempt new skills,” he said.
In addition to the band members, Bear said the drill team has played a huge part in advancing the show.
“They’re a major contribution with dance and color,” she said. “All the trash thrown over the field — they pick it up with dance.”
In addition to dancers, the show will feature flute players twirling flags and “playing” trash cans.
“I think it’s cool to see the differences between the color guard and what they do and what an actual marcher would do [while throwing flags],” flute player junior Ashleigh Tysick said.
Tysick said the flute section worked on the skills and routine since late July.
“[We learned from] our color guard instructor, and, after that, Mr. Bessetti kind of helped us,” she said. “Other than that, it’s been up to ourselves to keep practicing.”
Tysick said she’s excited to be performing the show because it highlights a different theme from last year’s show. Bessetti is also eager to see “Earth Song” in action, and the band will perform this show at all the home football games.
“Mostly, we just want people to watch, listen and enjoy the product of our student’s hard work,” Bessetti said.