Students at Blue Valley have been becoming more interested in Gender Equality after the club was introduced.

Although there aren’t many students in the club, Freshman McKenna Cole said they are still passionate about sharing their views during the meetings.

“From my prior experience, it’s a pretty good environment [because] you can just talk about whatever you want and you’re not going to be judged based off what you say, and it’s a place where you can share your opinions, and I feel like the people in there are just really accepting.”  freshman Cole said.

Although the members of the club may be comfortable sharing their beliefs during meetings, they may not comfortable doing so outside of the meetings because Cole thinks feminism does not have a very good reputation.

Cole said she thinks it’s because people were taught from a young age that women don’t need “to stand up for themselves” or people “didn’t think that feminism was a worthy cause.”

“I mean, obviously there’s the common quota that being a feminist means that you hate men, and that’s not true.” Cole said. I think feminism comes with the whole ‘too sassy’ or ‘too angry’ thing, I think that feminists are sometimes portrayed as looking for attention or just overreacting.”

“I think ultimately we would like for people to be treated equally regardless of their gender. I think we want to talk a little bit about how gender is viewed and/or treated differently in society and ultimately we want to work toward ‘what can we do to contribute to people being treated equally, whether it’d be, be here in school or in general population.” sponsor Jill Gouger said. 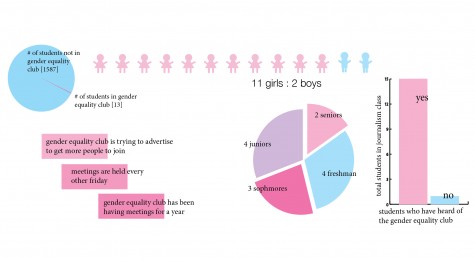