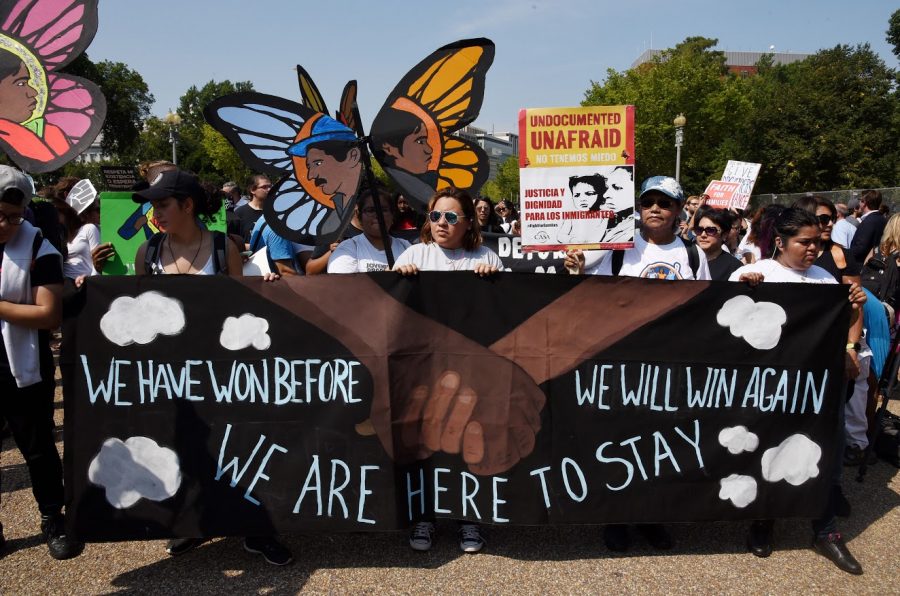 Protesters march in the streets in light of recent news of Trump Administration's plan to end DACA.

Imagine being one of 800,000 undocumented immigrants given the opportunity as a young child to achieve your dreams. Imagine knowing no other life besides in the United States, and suddenly being threatened to return to a country you can’t remember.

The Deferred Action for Childhood Arrivals (DACA) is a program introduced in 2012 by former President Barack Obama to protect immigrants, also known as Dreamers, brought to the U.S. illegally as minors by their parents. The label Dreamer derives from a bill called the Development, Relief and Education for Alien Minors (DREAM) Act, introduced in 2001 and has still not been passed by Congress.

Senior Juan Prats’ family is not a part of the DACA program, but his mother is an immigrant from Cuba who moved to the U.S. at the young age of 2, and became a citizen after 10 years of living with a visa.

“If I had to leave to go [to Cuba] it would be a huge adjustment mainly because they just don’t have all the technology available to them that we do here in the U.S., and lots of things are government controlled because it’s a communist country,” Prats said.

Children of immigrants, like Prats, can feel more connected to the country they’re raised in, rather than where their heritage is based, similar to Dreamers.

DACA has many contributing parts to it, but it mainly promises young, undocumented immigrants who meet the requirements and have no significant criminal record that they will not be deported for two years and grants them work permits in that same period of time. Every two years, Dreamers can renew their application.

DACA recipients still participate in an American life, like paying taxes and social security, but they remain ineligible for federal benefits — Medicaid, financial aid for college and emergency assistance for some Dreamers who are currently facing damages from Hurricanes Irma and Harvey.

Two years after the program began, Obama introduced an expansion of DACA and the creation of the Deferred Action for Parents of Americans and Legal Permanent Residents (DAPA) program, which was blocked in 2016 by a lawsuit filed by 26 states, including Kansas, that deemed the expansions unconstitutional.

After this decision, people began to question DACA’s constitutionality.

Ten Republican attorney generals wrote a letter to Attorney General Jeff Sessions threatening to launch a legal challenge against DACA through a lawsuit in federal court. They gave him until Sept. 5 to determine the program’s fate.

That day, Sessions and the Trump Administration announced its plan to end DACA in the next six months.

The final decision is up to Congress. Should they decide not to create a permanent plan to wave off mass deportations, 800,000 immigrants will lose their rights to work and live in the U.S. and be forced to return to a country they don’t know.

While being an immigrant who became a citizen and being an illegal immigrant are different experiences, Prats said he still notices the benefits of living here.

“The U.S. has been able to help [my mom] live a healthier lifestyle and a much more advanced one,” he said. “Freedom really is what it comes down to for her.”