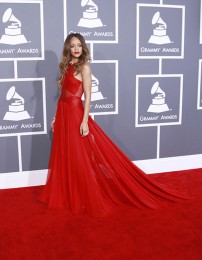 “What’s on my chain dollars?/ All of the bank dollars got change for small dollars/ Everything plain dollars/ I was in the back line, I’m standing in the bank line/ You throwin’ up gang signs/ Phresh out da runway (x16).”
In recent events, pop artist Rihanna was named the voice of the women of our generation at the American Music Awards (AMA’s).
Oh, yes, we are all throwing out gang signs “phresh out da runway.” I’m sure it was very flattering to Rihanna to be given such a high title, but I took it as an insult to myself and all the other girls in America.
I’m not sure I want men to be looking toward Rihanna when they’re trying to figure out how I would like to be treated. I’m sorry, boys, but I wouldn’t just drop charges if you beat me to near death and then threw me out of a moving vehicle. You’d be hard-pressed to find a girl who would.
I’ve never been a very big pop music fan because I believe there is an abundance of singers and bands out there that write lyrics that have a deeper meaning than twerking, smoking pot and getting pregnant in an unsanitary environment.
Although I wouldn’t necessarily want any woman in that genre of music to be speaking for me — or my sisters and friends — if I’d had to choose one, Rihanna would never have even crossed my mind. Instead of relying on someone who sings the word “cake” 15 times in a row in a single song to speak for us, perhaps someone like Katy Perry or Demi Lovato would have been a better choice.
Even I can admit a few of Perry’s songs, such as “Roar” and “Firework,” can get me pumped and feeling confident. Lovato has been through some pretty rough depression issues, including eating disorders and self-harm. I would rather have a girl who is using her experiences to lift up others through songs like “Skyscraper” speaking for me than a person like Rihanna, who just wants to talk about how rich she is.
I would even choose Lady Gaga as a representative before I looked to Rihanna. Sure, she may be pretty strange, but she also isn’t afraid to be 100 percent herself in front of thousands of critics and judges.
And what about Taylor Swift?
Almost all of her lyrics are about boys and breakups, yet she is still relatable and speaks the truth about female emotions when facing heartbreak.
I know dozens of girls who have struggled with depression, self-confidence and the male species. However, I can’t say I have talked to a girl who has “let that champagne splash, let the man get cash, goin’ numb (x10).”
We can’t blame this choice of voice on a bunch of judges at an awards show, though. A random human being did not just pull Rihanna’s name out of a hat and decide she was a good representation of our generation.
Unfortunately, there is logic behind Rihanna seeming to fit the definition of modern girls. And that logic rests with the girls themselves. For some reason I just can’t comprehend, girls these days seem to think all that matters is how attractive they appear to the opposite sex.
I see 12-year-olds running around in skirts that look more like belts.
School dances revolve around the best twerkers and grinders.
Social media is plastered with pictures of girls with bottles or bongs in their hands and 20 different guys around them.
Girls complain in the halls about their boyfriends treating them badly, but how can we even expect them to treat us right if we’re showing them the wrong way?
The saddest part in all of this confusion is rooted in the role-models we allow to be a symbol of us and our own lack of confidence. It’s time to take some self-respect back.
You don’t need to throw your butt up against a wall to get attention.
You don’t need to stuff your bra to get a boyfriend.
Stand tall like a skyscraper, roar like a tiger and show your colors like a firework.
You may be surprised to find the moment you start treating yourself right will be the moment everyone else starts, too.