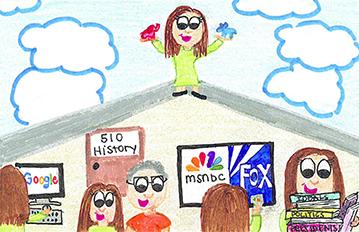 In high school, you’ll often come across your friends and peers arguing over political issues.

Generally, and quite unfortunately, high schoolers tend to get into these arguments via social media.

Not only do these arguments, which tend to go in circles, give high school students a bad reputation, but more and more peers will begin siding with those who are misinformed.

As high schoolers, we can have political discussions and arguments with one another.

But, it does us no good to dispute something when none of the members involved actually know what they’re talking about.

The fact of the matter is you simply cannot call yourself a Democrat or a Republican unless you have educated yourself on what those words mean and then decided what you stand for.

Believe it or not, it is OK to go against what your parents believe in.

Not all Republicans are bigoted racists who believe in working for their money and carrying a gun in the grocery store.

Not all Democrats are free-spirited vegans who work at Urban Outfitters and want to give everyone’s money but their own to substance abusers living on the street.

Use your trusty friend Google, instead of Twitter, for once.

After that, shout your views and beliefs from the rooftops if you want to, but don’t conform to your parents’ ideas and internet misconceptions just because they’re all you know.

Being informed about politics is important every day of every year, not just November every four years.

After all, the goal is to vote for someone who will actually do good for our country.