The rules of the classroom

Phones, iPads, computers and other de- vices are all part of the new age of technolo- gy. As advancements improve technology is becoming more and more used in schools.

Some teachers won’t allow you to be on your phone at all during the class, and others even threaten to take it for the whole day.

When students use their phones in class for non-academic reasons, they have a chance of getting their phone taken away.

But is a innocent text message or quick snapchat a reason to take away their phone for the whole day?

all, that’s a liable reason to take it away. But if they are on their phone for second, they shouldn’t get in trouble.

Kahoot, Quizlet and Edmodo are just a few of the tools that have recently been more involved in class.

When students use these tools, it’s one of the only times they can be on their phone.
If teacher are really bothered by a cell phone or other device in class, they need to let the students know what their rules are and when it’s OK to check their phone.

It’s the 21st century — our generation will only get more involved in technology, and some teachers need to realize that a quick check to the cell phone won’t hurt anybody. 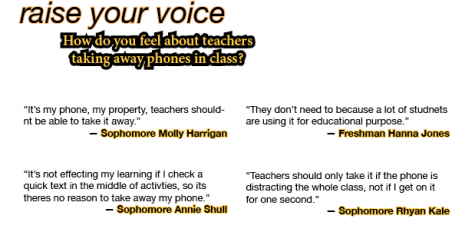