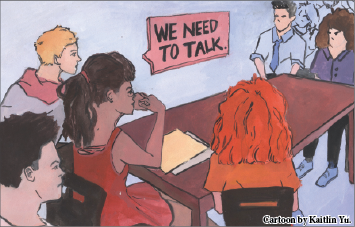 According to NSVRC.org, 1 in 4 females and 1 in 6 males under the age of 18 are sexually assaulted. The prevalence of these events in high schools are increasing.

Many people who are victims of sexual assault or rape feel ashamed about what happened to them. Especially in a school setting, victims often feel they should stay silent.

2017 is almost here, and it’s time for schools to step up to create an environment where these issues can be discussed. Victims shouldn’t feel like they can’t speak to their counselors or peers if they want to. They shouldn’t be afraid of being judged or talked about.

Principals and administrators tend to shy away from these topics because they can be seen as inflammatory, but instead of being silent, schools should have an open, honest conversation about sexual assault and rape in schools.

Students know that it happens.

Staying silent about sexual assault just furthers the notion that it should be a secret or that it’s the victim’s fault, which also perpetuates the thought that sexual assault is OK or isn’t a big deal.

By talking about how and why sexual violence happens, we could prevent sexual assault in the high school years and throughout the rest of our lives.

Students should learn more than just the typical subject matter — they should also discuss consent and respecting other people’s boundaries.

For many, growing older and becoming an adult involves different types of relationships, including sexual ones. Being a part of a sexual relationship requires respect and consideration for other’s feelings and limits, as well as knowledge about sex education.

Having a forum where sexual assault can be talked about could create groups where people can share their feelings and experiences without fear.

Under Title IX, victims are able to report instances of sexual assault or rape to their school if it happened on campus or involved another student at that school, and the school is required to investigate the case.

Instead of being tight-lipped about sexual violence, administrators, teachers, students and parents should work together to lead the charge for school-wide discussions about sexual assault and rape in order to provide more information and possibly prevent these events from happening in the future.