Traffic. What do you think of when you think of traffic? Stress? Jams? Accidents? Sounds about right. Here at Blue Valley, you will experience the whole nine yards.

Over the summer, the city of Overland Park decided to build much needed wider roads in front of Blue Valley High School. Along with the roads, Overland Park build lights and two roundabouts to help reduce and regulate the traffic.

It’s too early to tell how effective this will be because the construction is not done. 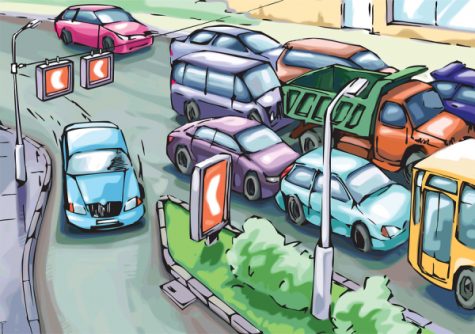 But, so far the traffic, on most days, has been unimaginable.

The roundabouts pose a major threat to the newly licensed teenage drivers, and the stoplights aren’t helping the traffic flow any better. There have been accidents already, within the first four months since school has opened back up. First, let’s start with the roundabouts. The roundabouts were made to reduce the amount of accidents and help traffic flow. Although, they are statistically proven to reduce accidents, place them in the middle of freshly licensed teenagers and you get danger.

First rule of thumb — always yield to the vehicle already in the roundabout. How come not many people know this? Some people expect cars to let them into the roundabout, when it should be the other way around. This is a major risk that has just been brought upon teenagers who are already prone to accidents. Streets Blog USA reports that this “creates a dangerous mess of cars pulling over and merging back into traffic.”

Next, the intersection stoplights. There are so many things wrong with this situation. Firstly, the cars that cross during the green light become stuck in the middle of the intersection because the traffic is so jammed on the other side.

This causes the cars going the other direction having to wait until the intersection clears up to move.

Add this to the fact that no matter how you try to get to school, you are going to be met with at least 15 to 20 minutes of sitting in traffic.

Hopefully, within the next couple of months, they will be able to finish the construction and help ease the traffic. But, for now, always leave your house 15 minutes early and bring a donut to eat while you sit in the traffic.