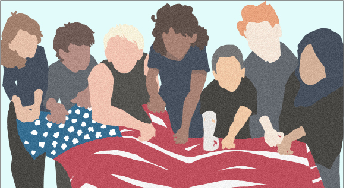 The election of 2016 was one of the most polarized elections in America’s history. There was no perfect candidate.

However, the country is not over just because Donald Trump is now president.

Through the next four years, our country will be able to learn, and any worries about the presidency could turn out to be obsolete.

Of course, just like any other presidency, things can go south, but he deserves at least a chance to show the American people what he plans to do and how he plans to do them.

Although there are many hurt feelings and fears surrounding the recent inauguration — especially felt by women, black people, immigrants and those in the LGBTQ community — we can still unite as a country.

Regardless of fears, no president can take away the inherent principles of our country — freedom, liberty and justice for all. The president doesn’t uphold that — the people do.

As long as Americans stay hopeful and stand by our core beliefs, our country will prosper.

Loving the president isn’t the goal — working together for a better and more accepting future should be what everyone is engaged and invested in.

President Trump needs to be given the chance to do a good job. Just like every other president, he needs support and guidance. Support him not as Donald Trump, but as President. As Americans, we have the right to criticize our government, and that’s not going away because Trump was inaugurated.

Although there are flaws within our country and society, the election is not a reason to complain solely about the president and stop focusing on things that matter. Continuing to unify as a country despite our differences and progress the economy, as well as creating ways to combat the Islamic State and other terrorist groups should be seen as priorities.

Even with those flaws, we’re still great. We’ve always been great and will continue to be great.

Our president has advisors and the system of checks and balances — even though there is a Republican majority — to ensure the values of America remain sacred.

The importance of state governments also gains increasing importance during this time as states like California were a Democratic majority vote.

The next four years could be an amazing time — it could really surprise us in a good way. It’s understandable that President Trump wasn’t a first choice for many, but as many Democrats and Republicans have both said, he does deserve a chance to succeed.

The election was a whirlwind of insults and scandals, but now that’s over.

It’s time to become supportive of the best country on Earth and be model citizens to lead this country into further greatness. Now is the time to put support in each other to ensure that the results that we want happen.