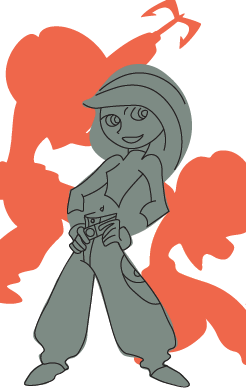 Some of you have seen the trailer or sneak peek of the new live-action “Kim Possible.” From what I have seen, it is a total disaster. The fight scenes are trash, the characters are barely even a shadow of what they once were, and don’t even get me started on the fact that Kim Possible isn’t even wearing her infamous, fighting crop-top.

Though it was only a cartoon, the original characters of “Kim Possible” had depth and angles. Kim was not your average girl. She cared about people and was headstrong. She knew right from wrong and didn’t think twice about telling others. Ron Stoppable was an oddball but he had heart. Even when he was scared of a mission, he never turned his back.

Although we don’t see much of Ron in the trailer or sneak-peak, it’s easy to see Ron is going to be more of the dorky guy with a very vague personality.

In the original series, Ron became friends with a naked mole rat named Rufus, a creature most wouldn’t even look at. However, Rufus is nowhere to be seen, and there has been no response from Disney as to where the not-so-furry little creature is. If there is no Rufus, live-action “Kim Possible” will be pushed further down in the trash can.

Looking at the characters from the live-action, Kim may be caring, but she doesn’t have the vibe of anything like the original character. The girl wears clothes that look like they’re from “Justice,” and she hardly matches the famous outfit cartoon Kim wore to every mission. The pants aren’t baggy and again, no black crop-top. She shouldn’t be in an “action” movie; instead, she should be on the cover of a Party City costume.

The fight scenes are garbage. Kim literally does the same move in every single fight — a jump kick. Does Disney expect us to be impressed? If so, I don’t hear any applause.

The original “Kim Possible” was extraordinary; it had characters that almost everyone could — and still can — relate to.

The live-action “Kim Possible” movie is just a way for Disney to make some extra money and feel like they did their part to help several young adults relive their childhood — when in reality, they’re destroying it.