What’s so bad about being basic? 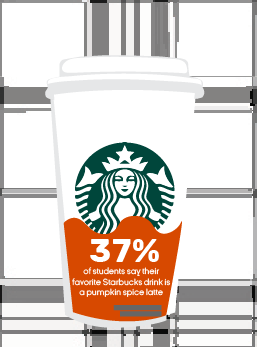 On August 24, Starbucks launched their fall drinks and bakery items for the season. Across the country, stores were flooded with teenage girls grabbing their celebratory Pumpkin Spice latte or other fall beverage — I was one of them.

While the mediocre, known-for-burnt-coffee, notoriously over-crowded coffee chain supplied thirsty teens with pumpkin-flavored treats, critical people shrouded in the protection of a username and screen were quick to pick apart these girls for their “basic” behavior.

In fact, virtually every fall themed festivity, and therefore the entirety of the season itself, have been enveloped into the societal interpretation of the “just like every other girl” trope.

Why should the consumption of a PSL, a trip to the Louisburg Cider Mill to grab some pumpkin donuts or the appreciation of a good maple scented candle make a teenage girl vulnerable to the criticism of those who view these values as basic?

The answer has less to do with the nature of these fall activities as it does the overall treatment of teenage girls as a whole.

This became evident when my sister, who has worked at Starbucks for four years, told me about the demographic of consumers of drinks which are traditionally perceived as feminine. She told me that in any given fall season, the majority of the people who order a Pumpkin Spice Frappuccino are actually men between the ages of 14 and 30.

For drinks that have become almost synonymous with the idea of being a basic teenage girl, the consumption of these drinks are far from isolated to this group.

According to data supplied to MarketWatch by The NPD Group, a market research firm, nearly half of pumpkin spice latte buyers are men, but just one-third of plain latte buyers are men. This means that while men may consume fewer lattes year-round, there is a huge surge in men drinking lattes — specifically pumpkin spice lattes — in the season of fall.

This hyper-feminization of autumn, along with the seasonal festivities, has allowed for the ridicule of young women to be accepted — at least when it comes to fall.

While now most people would be considered too politically correct to make fun of a girl for year-round traditionally feminine behaviors such as wearing makeup, being well-dressed, or having fake nails, the phenomenon of the PSL has only been around since 2003.

While the pumpkin-spice craze and its accompanying features has existed for almost two decades, that seems hardly as impactful as the centuries it took generations of women and men alike to change the structure of gender roles to what they are today.

Though it may take society as a whole a few more centuries to achieve freedom of gender expression, individually there is potential for immediate change.

Next time you see a teenage girl laughing with her friends as she enjoys a pumpkin-spiced drink with a side of pumpkin bread in her oversized sweatshirt and Air Forces, you may be tempted to internally — or externally — criticize her for seeming like every other basic girl in Overland Park. Instead, I challenge you to consider why you are criticizing this behavior at all.

After all, I don’t hear you making the same comments about your 15-year-old brother’s Fantasy Football League.