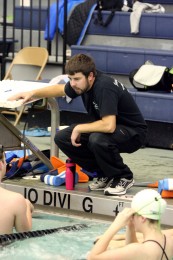 Adam Bien, former St. James Academy assistant swim coach, has been announced as the new swim coach.
After Greg House passed away due to stage IV lung cancer in August, administrators were left with the task of finding a new coach for the upcoming season.
For about two months, athletic director Bob Whitehead searched for someone to take House’s place.
“When you find the right person, you can tell,” he said. “However, when you get it wrong you can also tell.”
Whitehead said finding a new coach was a struggle.
“It’s hard when the head coach is taken quickly,” he said. “You don’t have as much time to make decisions as you would like. I wasn’t able to start looking immediately. It was a very emotional situation.”
Varsity swimmer senior Beth Houghton said losing House will make the upcoming season difficult.
“The season could go differently,” she said. “But I know that the returning girls will want to do just as well or even better than they have in the previous years — in memory of him.”
Whitehead said House left the swimmers with a number of traditions.
“One legacy he left with the kids is that you can achieve certain goals if you want to work on it and pay the price,” he said. “They all understand now what it takes to be the best.”
Shan Secrest, who was the girls assistant coach last year, will be the assistant coach for both the girls and boys this year.
The new head swim coach was chosen after approximately six weeks of interviewing potential candidates.
“When I started out, I was looking for someone who understood our program,” Whitehead said. “Someone who was used to the practices Coach House did and had a similar philosophy to what we are used to.”
Whitehead said Bien fits this profile. When he was in high school at BV North, he was one of House’s swimmers. While Bien was there, the swim team won three state championships.
“He knows what kind of swim workouts we’re talking about,“ Whitehead said. “He knows what it takes to get there, and he knows how to win a state championship.”
Bien said he looks forward to being a part of the swim program here.
“I want to maintain the tradition that Coach House started — getting the swimmers to swim to the best of their abilities,” he said.
Varsity swimmer junior Vaughn Ericson said the season won’t be that different.
“I don’t think [having a new swim coach] will affect the season as much as people think,” Ericson said. “We will have the same practice schedule and workouts. It should be an easy transformation.”
Bien said it will be difficult to follow in House’s footsteps.
“One thing Mr. Whitehead and I talked about during the interview process was that I am not Coach House,” Bien said. “I do have lots of the same values as him, but I’m not him. I think that will be hardest thing, just getting the guys and girls accustomed to how I run things.”
Bien said he will push the swimmers to work hard and set goals.
“The hard work ethic is a big part of it — knowing that we’re going to work harder than everyone else,” he said. “I want them to be aware of the end time they will need to get in order to go to State. Each week I’m planning on sitting down with them and talking about their personal goals for the upcoming week.”
There was a meeting for the boys swim team to meet Bien.
“He reviewed his résumé with the boys,” Whitehead said, “He talked to the boys about his previous experiences. He told them he wants to win a state championship. A couple of boys came to me after the meeting and said they were pleased because he has a good background in both club swimming and high school swimming.”
Whitehead said Bien has already given the swimmers some workouts to do before the season starts.
“It’s important that he be himself,“ Whitehead said. “Many of the workouts will be the same, but he also has developed some of his own.”
Whitehead said choosing Bien has relieved a lot of stress.
“I am happy we are moving forward,” he said. “Sad we had to do it, but happy we have a good quality coach who will hopefully be here for a long period of time.”