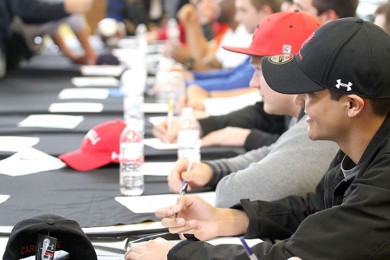 MARKUS ZIMMERMAN
University of Central Missouri, Football
“I’ve always really liked Central Missouri. They have a great football program and a great agribusiness program I want to go in.”

ZACH DELEON
Drake University, Football
“I chose Drake because I liked the idea of playing Division I football as well as getting a great education. I also liked that it wasn’t too far away from home either.”

BLAKE FREEMAN
University of Central Missouri, Football
“I chose it because it’s very competitive in football, but also a college where I can have fun at the same time. It’s not too far from home, but close enough I can get back if I need to. Markus [Zimmerman] and I decided to go there together.”

MIKEY HENSON
Northwest Missouri State, Football
“I mainly chose [Northwest] because it’s a lot like Blue Valley with the tradition, the family, the teammates being close.”

CHANCE NELSON
William Jewell University, Football
“I decided to go to Jewell because it is a lot like Blue Valley. It’s a great college environment, a great area, and I really liked the coaches a lot.”

LOGAN BRETTELL
Baker University, Football
“It was really close to home, and they gave me the opportunity to play my positions, quarterback and kicker.”

RILEY STINSON
Simpson College, Football
“I chose Simpson because I would get early playing time, and I liked the coaches. I like the school because it’s close to Iowa State [University], so I can still be social.”

FRANKIE GOMEZ
William Jewell, Football
“It’s one of the best schools in the Midwest, and they have a great Med-Sci program. They’re really organized up there, and I really liked the coaches.”

HENRY MCGREW
University of Illinois, Football
“I felt like Illinois was the best fit for me, and I just really liked it.”

JALEN “COOKIE” COOKS
Hutchinson Community College, Football
“[I chose Hutchinson] to get my grades up, and they win a lot. I just thought it would be good to go, and they have four jerseys.”

MONTANA BRADY
Hutchinson Community College, Football
“I like the football community there, the facilities, weight room, the coaches and that Cookie [Cooks] and I will be roommates.”

HAILEY MCENTEE
Benedictine College, Soccer
“Benedictine is the perfect place for me. The opportunity came up around the summer, and everything fell into place.”

BROOKE ZIMMERMAN
Missouri State University, Soccer
“A couple of my teammates are going there, and I really like the campus. I think it will be a really good environment for me.”

BEN MCDONALD
Rockhurst University, Soccer
“I chose to go to Rockhurst because I like the way they play, and I like the community. Everybody kind of knows each other.”

RACHEL CAMPBELL
Baker University, Track & Cross Country
“I decided to go to Baker because I liked how it was a good distance from home, and that it was a small kind of place.”

JEFF JACOBS
Liberty University, Track & Field
“I chose Liberty because of the awesome faith-based campus life they support. They put God over everything, and that is a place I want to spend my college track future.”