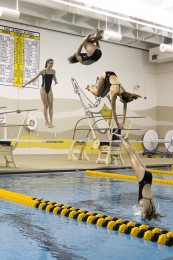 Dive coach Bridget Allen coaches both Blue Valley’s and BV Northwest’s girls diving teams.
BV’s team consists of four sophomores, Meg Hollingsworth, Meredith Strickland, Rachel Borcherding and Madison Doherty. BV Northwest’s team has seven or eight dive members.
Hollingsworth said having a coach who has two teams does not affect the individual help she gets from her coach.
“We all learn at our own pace, if we need to work longer, she’ll stay longer with us,” she said.
Allen said she thinks the divers all get what they need.
“I accommodate all dives on an individual basis,” she said. “Diving is a sport that requires more individual attention.”
She said most of the time when teaching new dives, everyone’s will be the same or similar.
Since all divers at BV are cheerleaders, Hollingsworth said it helps to learn dives quickly.
“It helps because I know the correct forms, where my body needs to be and when and which way I should spin,” she said.
Hollingsworth said there isn’t much tension or competition between the two teams.
“We all pretty much think of each other as the same team because diving is more individual rather than ‘Blue Valley vs. Blue Valley Northwest’ type of thing,” Hollingsworth said.
Allen said she agrees.
“I have coached two teams for so long that I very rarely consider them two teams,” she said, “I always view them as one team. It’s always each girl diving against themselves to do their best, never BVHS vs. BVNW.”
Allen said she thinks this year’s team has a lot of potential.
“Now that I have three divers with varsity level dives, I think qualifying for State is an attainable goal for all three of them,” she said.
Hollingsworth said having another team to practice with helps.
“I think it helps because when there’s more divers, you get to see a variety of dives and skill-levels,” she said.
Allen said she enjoys coaching two teams and thinks it is beneficial to herself and the divers.
“I like that the divers have the experience of diving at two different schools,” she said. “It helps them adjust more easily to different diving boards. But yes, I admit I have occasionally gone to the wrong school for practice.”