A League of Their Own: Rugby team competes without school affiliation, gathers players together from district schools 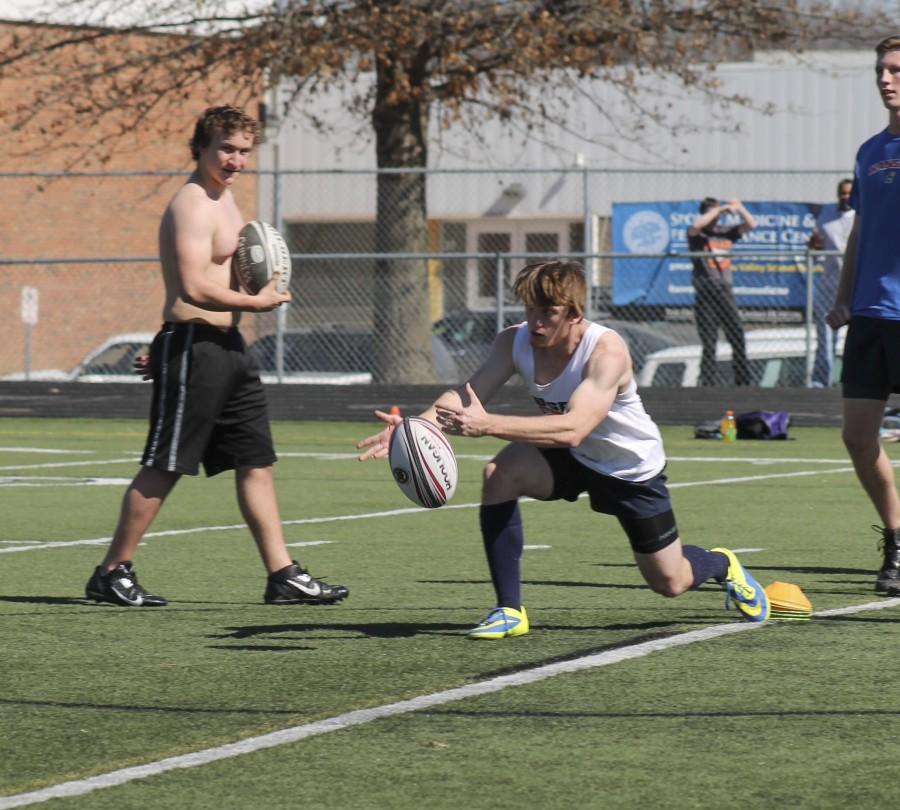 The Blue Valley Rugby Club is locked in a dog fight with Saint Thomas Aquinas, both teams battling fiercely for possession.

The team’s jerseys do not read Tigers or Timberwolves, but instead read “BV Rugby Club,” gathering players from all corners of the district.

The seventh season of the BV Rugby Club kicked off March 10 at St. Thomas Aquinas with 17 rostered players taking to the pitch.

From fly-halves to fullbacks to hookers, these athletes put aside school rivalries in the name of one club and one district.

Senior Sam Kohn said the mix of players from different schools is unique and makes the team function more effectively.

“It’s just a good time because there are more people who know different things,” he said. “Everyone brings their own spe- cial charisma.”

KSHSAA does not list rugby on its website, and the sport is not affiliated with the association.

Due to the sport not being sponsored, the team competes as a club, and Kohn said the team does much of its own business procedures, including raising money and reserving practice fields.

“We have to fundraise because rugby is really expensive to play,” Kohn said. “We have to figure out where we are going to practice, and we have to pay for the fields.”

Some of the team’s practices include unofficial scrimmages against regular season opponents, which Kohn said helps the team improve strength and strategy.

“Sometimes we’ll scrimmage with Olathe or Aquinas, and we’ll work together,” Kohn said. “They’ll tell us some stuff about the game and how to play it bet- ter. Our coaches help us out, and we just get better every day.”

The team’s head coach is Paul Tripp, a former player for the Kansas City Blues Rugby Club and a member of the Blues Hall of Fame. McLeroy said Tripp does a wonderful job of teaching the game.

“Coach Tripp is honestly
the best coach I’ve ever had,” McLeroy said. “He connects with everyone, and he knows what he’s talking about.”

McLeroy said Tripp under- stands the methods of coaching at the high school level.

McLeroy said the team’s goal is to get invited back to Nationals. Last year, the team was invited but had schedule conflicts.

“It was on the same day as graduation for Blue Valley, so only like six guys could go,” he said.

March 10, the Tigers fought against the nationally ranked Saints but fell 20-0. The team will host the KC Junior Blues of Rockhurst, one of the top teams in the nation, April 11, in a top- notch home match at BV District Stadium.