Fantasy Football evolves into something all football fans play

Every start of a NFL football season, friends get together and do what most fans love: dra a Fantasy Football team. It has become an American pastime, as groups of all ages compete to have the best team and win over bragging rights.

According to FSTA, with an estimated 57.4 million people that played in 2015, Fan- tasy Football has grown to new heights and will only continue to grow.

friends and have something that goes right in hand with the game.

“I play Fantasy Football because it’s fun way to get connected with your friends, and it makes watching football even more fun because it adds a new element to the game,” junior Kyle Elmendorf said.

Other avid fantasy football players have their sights on bigger things, and focus on more of the end result.

“To make the playo s and to try win the championship, because I can win the big pot of money,” said Blake Brown, a junior and varsity football player at Blue Valley.

Also, many seem to be in many leagues with all sorts of people, whether it’s friends,

family or just strangers.
“I have one main league that I’m really de-

voted towards but I have a few other leagues here and others with family and friends,” Elmendorf said.

And for most, they having been playing since they were in middle school.

“I have played since sixth grade, and real- ly have enjoyed every year of it,” Brown said.

Fantasy Football has become so popular that people from around the globe have start- ed playing, adding more fuel to the already enormous base of players.

“Fantasy Football has become something anyone can play, and that’s why its so much fun,” Elmendorf said. 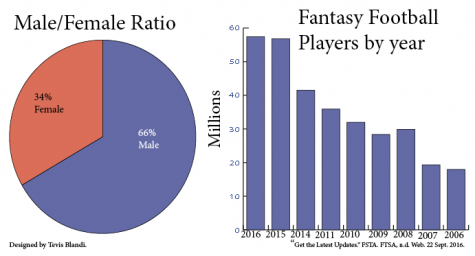