A look at each of BV's second semester sports 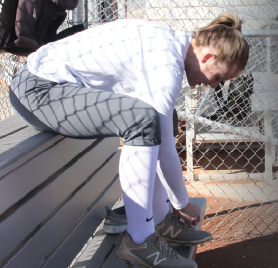 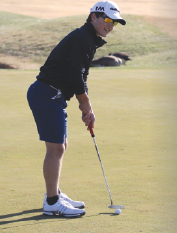 Senior Sam Anderson is a captain of the golf team. He said last season they didn’t finish strong.

“We qualified for State, and we played,” Anderson said. “We didn’t perform outstandingly. This year I have higher hopes we’ll play better.”

He said he has goals for both himself and his team.

This season, the golf team has a new head coach, Allen Terrell. “I am excited for coach Terrell,” Anderson said. “I think it’s going to be a lot of fun.”

Anderson said because he is a senior, his role on the team has changed.

“I have been playing for four years,” Anderson said. “I need to lead them, improve the team’s game and carry on the tradition of good BV golf.”

Although Anderson is a leader on the team, he said he and senior Michael Secrest still manage to have an enjoyable time.

“We have a lot of fun,” Anderson said. “We kind of give the younger kids a hard time, but we make sure they have a good time at the same time. Secrest and I have always been the jokers of the team, so that hasn’t changed.”

Anderson said he hopes the team improves on shooting lower scores. His individual training for the season began early.

“This winter, Secrest and I lifted at Lifetime,” Anderson said. “In season, we play nine holes four days a week.”

Anderson said he likes playing golf with his teammates.

“It’s a good time,” Anderson said. “You get out in the fresh air with your friends and improve.”

Last year’s softball team won Regionals and made it to State. Junior Ashley Pinkham said they wished they could have done better at State.

“We made it past Regionals for the first time in six years,” Pinkham said. “It’s an achievement. We lost in the first round, but I think we can do better this season.”

Pinkham said this season they will have to get used to new players.

“We lost a lot of seniors,” Pinkham said. “We basically have a new team.”

Training for the season began in the winter.

“We have off-season conditioning three days a week,” Pinkham said. “We hit and pitch on our own time.”

Pinkham said because she is older, she needs to be a leader.

“I have learned from the people ahead of me,” Pinkham said. “I try to help the underclassmen.”

Pinkham said a goal for the team to play as a family.

“[I look forward to] getting to play with my friends,” Pinkham said. “[I enjoy] having pride in playing for the school.” 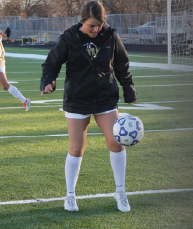 The 2017 girls soccer team won Regionals for the second year in a row. Senior Sydney Rogers said they’re hoping for a similar result this season.

“[We hope] to continue the good leadership that has been led by the [past] seniors,” Rogers said. “We want to make it further than Regionals this year.”

Rogers said they have been training before the regular season began.

“We had pre-season workouts every Monday, Wednesday and Friday before school at 6:15,” Rogers said. “During season, we practice every day after school.”

As she has progressed through high school, Rogers said her role on the team has changed. She said she acts as “team mom” and keeps everyone in order.

“As you get older you have to become more of a leader,” Rogers said. “I [also] changed positions.”

Rogers said she hopes the team improves on winning this season. She said she looks forward to spending time with her teammates.

“[I enjoy] the fun times in the locker room before the games,” Rogers said. “[I like] my teammates and representing my school.” 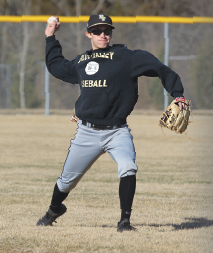 “[Last year] we were very satisfied because we won State,” he said. “Our pitching really performed well.”

Howard said their training for the season began in the winter.

“People who don’t do a winter sport work with PSP3, [a sports training facility,] three times a week,” Howard said. “I know they do a really good job working with us.”

Because he is a senior, Howard said he is expected to be more of a leader on the team.

“I need to get all of the juniors and sophomores ready to play varsity next year,” Howard said. “[I need to] lead them on the field [and] tell them what to do because I’ve been playing at least a year longer than them.”

Although the Tigers enjoy success on the field, Howard said there is still areas they need to improve.

“Our pitching was pretty good last year, and we’re returning a lot of pitching,” Howard said. “If we can improve our hitting we’ll be a pretty good team.”

Howard said he looks forward to playing this spring season.

“This will be a crazy time of the year with graduation and everything,” Howard said. “It will be really exciting to see what we can do. It’s a fun game to play.” 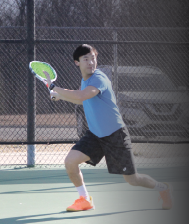 Senior Max Wang is a captain on the tennis team. Last year he finished fourth in the state in doubles. He said, however, the team didn’t do as well as it could have.

“There’s only six teams who qualify from our region in doubles,” Wang said. “Two of them were able to make it to State from BV. My doubles team had the potential to get third at State, but we choked.”

This season, however, Wang said he won’t play doubles.

“This season I am probably going to play singles,” Wang said. “I am hoping to finish within the top six at State.”

Wang said because he is a senior captain, he is expected to serve a major leadership role on the team.

“Before practices, I lead the stretches,” Wang said. “I try to get the team pretty hype on the car rides if I get the aux.”

Wang said their preparation for the season began in February and included conditioning after school.

“This winter, we hit the weight room and team-bonded,” Wang said. “We were all trying to get jacked. When you see a tennis player, don’t think they’re a football player because they’re so huge.”

Wang said he enjoys competing in tournaments, and hitting every day after school with his friends.

“I am looking forward to playing tournaments,” Wang said. “If it’s during school, that’s even better because I get to miss school. I just really like smacking [tennis] balls.” 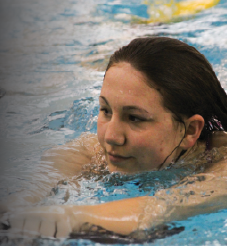 Junior Bailey Sibenaller has been on the Blue Valley girls swim team since she was a freshman.

“When I was a freshman, I wasn’t really confident in my swimming skills,” Sibenaller said. “I just laid low. Now, I’m trying to step up and help out the freshmen.”

Sibenaller said the team had a satisfying finish to their season last year.

“We ended State pretty well,” Sibenaller said. “We didn’t have an amazing team so we did what we expected. We were happy with that, but it wasn’t anything special.”

She said this season she has higher expectations.

“We’re hoping for a better team this year,” Sibenaller said. “There are a lot of freshmen and other people who didn’t do it last year who are coming out this year. We’re hoping to make our relays the best they have been in a while.”

Making it to State is one of Sibenaller’s goals this year.

“My individual expectations would to be to make it to State in both of my events,” Sibenaller said. “I’m hoping to place higher in EKL.”

She said their team training started before the regular season began.

“For preseason, you’re expected to come in and work out at the fitness center,” Sibenaller said. “Other than that, it’s just to get in the water the first day.”

Sibenaller said one of her favorite aspect of swimming is watching her improvement during the season.

“I like swimming because there’s a lot of individual growth,” Sibenaller said. “Seeing my times get faster throughout the year after working hard has made me happy.”