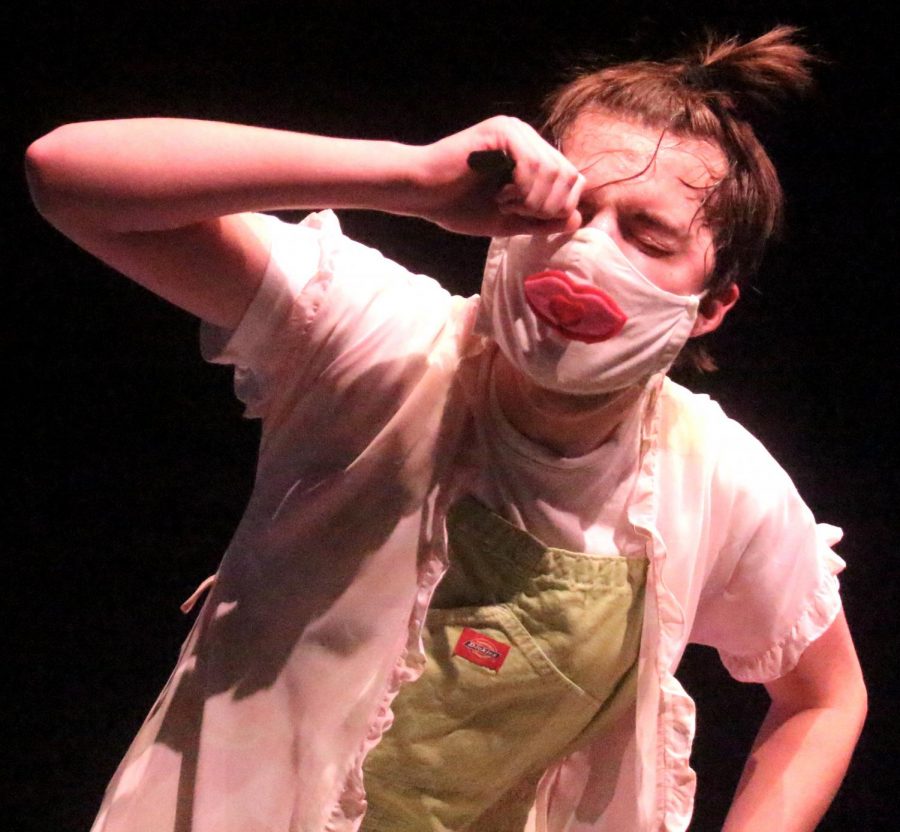 Working with a smaller cast than usual, junior Joey Compton was excited for the theatre department’s comedy production of The Complete Works of William Shakespeare Abridged.

“I prefer this size way more due to having more notes and stage time to improve,” Compton said. “I worked with [freshman] Grant [Kozisek] the most, which was cool because he’s the first person I’ve worked with as an upperclassman. [I wanted to be] someone he could talk to and hopefully learn from.”

However just days before show night, Compton was diagnosed with COVID-19, exempting him from performing.

“When I heard I would be quarantining during the nights of the show, I really didn’t know to feel,” Compton said. “I wrote in my journal and just went on with my evening.”

Despite not being physically present at the play, Compton found a way to still make a guest appearance.

“We had a few pictures we put on a big screen. I’ve got a green screen at home and thought it would be cool if I recreated a few of the pictures using myself,” Compton said. “That was a bit too complicated, so I added myself to a few backgrounds as a tourist. I felt sick, [but] watched the show from my room [on a livestream]. I’m so glad I went through with it.”

Though he wasn’t able to perform, Compton still feels grateful for participating in the show.

“This really was a good experience despite the upsetting ending, but I think I made the most of it,” he said. “There still is so much more theatre to do after all.”

Blue Valley’s marching band is on hold for the year. The students had to adjust to online band as well as following the National Federal of State High School Associations (NFHS), which commissions musician guidelines while playing in school.

The band members and their instruments have special masks and coverings in order to create music safely. When playing in school, students take a 15-minute break every half hour to reduce the amount of CO2 that the band produces.

Freshman Miles Gilman heard the news about the marching band canceling the season.

“I was pretty sad because this would have been my first year playing,” Gilman said. “So now I don’t know what it’s like.”

Many seniors are also unhappy with the effects of COVID-19 on band.

“It was heart-breaking not having a final season — I [haven’t] improved as much as I thought I would my last year due to asynchronous [learning],” senior Colin Crissler said. “It’s just going to be a lot of me at home playing by myself.”

Senior Kaitlyn Doshier is playing for one of the three senior powderpuff teams at BV this year.

“I decided to join the league because it helps bring us [senior girls] together since we don’t see everyone during school,” Doshier said.

For her, the game is a way to have fun and be active.

“We get to work together and figure out plays as a team,” Doshier said. “On defense we all make sure we have everyone covered.”

Doshier said the league is a fun way for upperclassmen girls to have a good time with each other and play a sport they wouldn’t usually get to play.

On Nov. 17, the choir department had their first show since the pandemic hit. With only a family audience, all groups performed once during one of three alotted times, except for Chambers, which made an appearance in each segment.

“Even with the changes, it felt somewhat like a return to normalcy,” Warren said. “The cancellations on account of COVID-19 this year have been disheartening so I am grateful we had the opportunity to perform.”

Because of the risk of spreading the coronavirus, choir has to take several precautions in order to remain safe.

“Every time we come into choir, we change into masks provided by Blue Valley,” Warren said. “We also have to change rooms every thirty minutes.”

With having a new director whose style differs from previous years, Warren said there has been a new type of responsibilty for the choir students.

“This year has put a lot of pressure on the students to learn choreography and music,” she said. “I’ve gained a lot of self-discipline [and] also realized how much I took performing for granted.”

Along with the rest of the changes this year, the choir and theatre department have joined forces to work on upcoming productions together.

“We are splitting [the musical] into an underclassmen and upperclassmen one,” Warren said. “I am eager to see how both will be carried out.”

Junior Katie Daniels is looking forward to her third season with the BV girls basketball team.

At the beginning of November, preseason workouts were canceled in order to ensure all the athletes would be healthy for tryouts prior to Thanksgiving break.

Despite the schedule change, Daniels and her teammates are excited to play together and make the most of their season.

“It’s going to be difficult, [and] we’re going to have to get used to it,” Daniels said. “We’re all willing to put in the effort to make sure we have a season.”

Their first game is tonight at 7 p.m. at Gardner Edgerton.

Senior Ken Drakey has been on the boys swim team since his freshman year. As a senior playing a sport at BV, Drakey has had a lot to look forward to including, “motivating the younger swimmers and encouraging more team bonding.”

Similar to other sports this year, the boys swim team has taken a major hit.

“Our team hasn’t been able to do any preparation so far,” Drakey said. “We finally just found out that we could actually have our season.”

Despite the setbacks, Drakey, along with the rest of the team, has focused on all the positives that the sport has brought.

“I’ve made friends with different people from different groups that I wouldn’t have been friends with before,” he said. “Overall, it’s just a great experience. It’s been awesome.”