There is a multitude of different kinds of people at Blue Valley. Whether the diversity involves race, religion, sexual orientation or simply contrasting political opinions, no two people think or function exactly alike. These differences are bound to cause disputes, create rifts and leave some feeling alienated. However, this struggle is not something specific to the school level. The world — and specifically the nation — constantly grapples with cultural and political differences. Theseproblems leave citizens with a choice: to open a dialogue in the battle between defining what is acceptable and what isn’t, or to watch as the world erupts into chaos.

The Tiger Print spoke with students and faculty regarding censorship, the First Amendment and the events that took place in Charlottesville, Virginia. 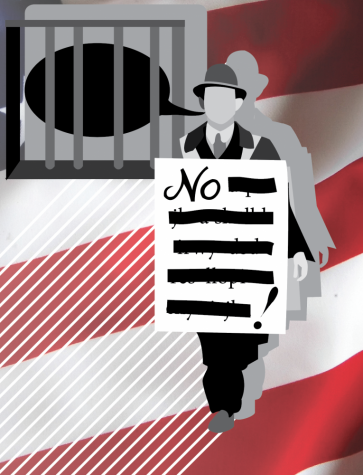 At Blue Valley, some websites are blocked due to content that is deemed not suitable for students. Senior Chandler Jones said he believes the school shouldn’t censor information from students in order to prohibit dangers such as bullying.

“All you are doing is preventing them from doing it in school — not outside of school,” Jones said. “The best thing you can do in cases of bullying is not attempt to intervene or prevent, but to react. It is better to let things take their course and intervene at the right time [rather] than attempt to prevent and end up not helping much.”

The Children’s Internet Protection Act (CIPA) requires all K-12 schools to use filters and regulate what students have access to on the internet in order to shield them from potentially explicit or harmful content. CIPA requires this as a condition to receive federal funding. Sixty-two percent of BV students surveyed said they believe the district should continue to censor potentially harmful content. Senior Noah Kahn said this should include content that could hurt students.

use it’s an environment where students are trying to feel safe and grow up. There was a girl at our school, who, freshman year, people made anti-semitic comments toward, and now she’s at a different school because of it.”

Senior Adrian Barrett said he believes it is necessary for students to be limited in what they can access at school, however, he said speech shouldn’t be censored nationally.

“If you try to restrict speech in any way, it crosses a fine line of restricting freedom of thought, which I think should be protected,” he said. “No matter the horrific opinions people have, they should be able to express them. Those ideas have a right to be heard.”

“The violence on either side [in Charlottesville] can’t really be justified, But I feel like both sides have the right to peacefully protest, even if it’s for horrible things.” — senior Adrian Barrett

Earlier last month in Charlottesville, Virginia, the Unite the Right rally, organized and delivered by far-right groups, took place. The purpose of the rally was to protest the removal of a statue commemorating Robert E. Lee which stood in the city’s Emancipation Park. The rally turned violent when counter-protests and the far-right groups collided.

During a demonstration, a white nationalist drove a car through a crowd of counter-protesters, injuring 19 and killing 32-year-old Heather Heyer. President Donald Trump condemned this violence, though took a neutral perspective, blaming both sides for the brutality. This sparked a conversation regarding the handling of situations where two bodies of people disagree.

Thompson said her responsibility as a teacher is first to listen to students when they express an opinion, but if the opinion could constitute something hurtful, she asks them for reasoning and provides better reasoning in support of the contrary. Thompson said she also encourages her students to recognize empathy as a strength.

“In the recent political climate, it seems like empathy became a weakness,” she said. “It’s not. This isn’t a dualistic idea — it’s not one end of the spectrum or the other. You can care about the country and your family and also care about other people that you don’t even understand. No one says you have to understand what it is to be transgender, or what it is to be a refugee. But, you can have empathy or sympathy for them.”

Kahn said speech targeting a group of people should have repercussions.

“Hate speech should absolutely be punishable,” he said. “When you express an opinion that [threatens] the safety of others, the government should do something about that. There is no reason to threaten a group of people based on an opinion.”

In response to the violence in Charlottesville, Thompson said she believes there has been public confusion over the intents of the groups involved.

“The neo-nazis and [Ku Klux Klan]— their whole mission and purpose is to exterminate certain demographics — through violence, if necessary, and through laws if they can — whereas the purpose of Antifa is to eliminate those kinds of people,” she said. “The purpose of Black Lives Matter is to remind the people in this country, ‘Hey, you forgot black lives matter, don’t forget black lives matter.’ People want to paint all these people with the same brush — and they’re simply not [the same]. Their tactics aren’t the same, their mission isn’t the same and their endgame isn’t the same.”

Despite falling numbers, groups like the Klu Klux Klan and neo-nazis still manage to garner media attention. Jones said censoring this controversial speech is not going to help end it.

“There are people who are going to use the First Amendment to be mean or hateful,” Jones said. “But, there are also lots of people who use the first amendment for productive conversation and the ability to criticize the government or peoples depending on what’s going on. I’m sure there are people out there who would exploit the First Amendment and say mean or hurtful things — but that’s the way it has to be. The best counter to that is having productive dialogue with them.”

Since the unfolding of Charlottesville, many have questioned whether or not the removal of confederate statues is necessary. Thompson said she believes the U.S. hasn’t figured out the difference between glorifying and remembering.

“We are inflating this idea of preserving history with preserving racism,” Thompson said. “Keeping a statue of a person that represents the subjugation of a people is not the same as preserving a history. We can remember this history, study it, put it in museums and schools and textbooks. But they don’t need parades. They don’t need statues. They don’t need to be glorified in the face of people who will walk by every day saying, ‘I will always be a second-class citizen while this image looks down on my town.’”

Jones said instead of restricting dialogue or exploiting certain groups, it is better to open a conversation.

“Sure, some people are going to be incurable,” he said. “But those numbers are so small, they don’t even have a rate of growth. Look at the Klu Klux Klan — in the early 1900s their numbers were around 6 million, now they’re around 6 thousand. We made an unbelieveable amount of progress in that department, and I think, for the most part, those voices will remain unheard unless we give them attention.”