Star in the Making

Who would have thought a normal college visit would have turned into an audition for a Broadway production in front of a famous choreographer on the 12th floor of a skyscraper in a tiny room that, when filled, was almost an entire Blue Valley hallway shoulder-to-shoulder, so small you couldn’t take any steps?

Senior Ryan Jacobs auditioned in Boston at Berkeley University in December of 2019 for the show “The Music Man” while being in the area for a college visit he was already on.

“I found out the week before that Playbill, a Broadway organization website, posted an audition notice on their website for the revival of the show,” Jacobs said. “I was up in Boston, so my dad and I found a flight that transferred so that we [could] just drive a couple hours to do the open call because it was open to anybody.”

Jacobs said this audition was different than most because usually you have to have an agent or be part of some kind of union to get an audition slot. But this audition was open to anybody in the area who put their name on the list.

“We showed up super early [to] the 12th floor of Pro Studios, [a] big casting office downtown,” Jacobs said. “There were kids stretching [and] warming up. By the time the call actually started, there were 600 people there. They had holding rooms for people after they signed up. I stepped out of one, and it was literally like filling almost an entire Blue Valley hallway shoulder to shoulder — you couldn’t take steps.”

Jacobs said the amount of moms and anxiety in the room was overwhelming. 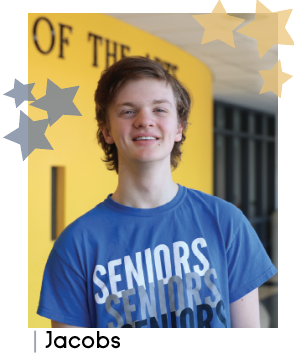 “The choreographer took us into a room — he’s done a ton of Broadway shows,” Jacobs said. “He was the one who taught [the dance] which is cool because I thought they were gonna have an assistant to do it or something, but he brought us all in and he taught us a combo. He walked us through each [dance move] and told us what he was looking for for each section of the dance.”

Jacobs said he was taken into another room for him to give them his resume and headshot.

“We did the audition for [the director], and another lady sitting there, and they would watch and [after the audition] would say thank you and then they would take the resumes,” he said. “They had two piles of people — people they wanted to keep in and people that they’re going to excuse.”

Jacobs didn’t end up getting a part, but he did gain a new experience.

“They’re really looking for technique — it was fun and such a cool experience to know that I was in the room that it was happening,” Jacobs said. “I did the best I could have done. I’ve taken ballet for five years but I’ve kind of put my time in other things like composition, acting and other music ensembles, so I’m OK that I wasn’t at that level. It was really cool to see that I still did well and held my own in the other parts.”

He said auditioning was a positive experience filled with immense support. Even though Jacobs didn’t make it into this show, there is promise in the future.

“A cool thing is if I’m not right for this, a lot of times casting directors, if they like you, they’ll be like, ‘Great, we’re not needing you for this,’” he said. “If you stand out, they’ll [call you for a different role you might fit better in].”

Jacobs wants to continue his music passion in college.

“[I’d want to attend a university] anywhere that’s going to let me compose and do musical theater performances,” he said. “If I can get anywhere close to the city, like my college audition in Boston, that would be cool to do train rides up there. I would love to keep performing [because it is] a part of my life, as long as I get to keep the other things, too. It was a cool experience to see if this could be for me, so I’ll definitely keep going for it.”